I used German Grey primer by Vallejo to create a good, sturdy surface for the subsequent layers of paint. I used to use spray cans as the application is quick, but it’s also somewhat risky. (You can easily flood the model with paint.) Setting up the airbrush and the fume extractor (paintbooth) is time consuming, but I think overall it’s a better alternative. This particular primer is pretty easy to use, too, as it does not require any dilution; it can be sprayed straight out of the bottle. I sprayed the lower sections of the anti-HEAT rubber sideskirts separately.

I assembled the tracks using a very thin liquid glue. I normally glue two links together, and then join up these sections into larger and larger sets of links. The glue allows for relatively long time to work the tracks, so it’s relatively simple to push them around the drive wheels and idlers after 30-40 minutes of drying time. (I almost switched the drive wheels and idlers; I’ve built too many German tanks lately I guess.)

The tracks were painted with the same primer, rubbed using a metallic pigment to give them a nice, steel shine. I also applied some rust colored washes (relatively bright orange to dark brown) at this stage. (The dust will be added later.)

I went over the model using OD green from Tamiya on the lower chassis and road-wheels. This is a dark, an almost grey-green color; this color represents the darker areas covered by shadows. I painted the rubber rims with a dark grey color. This was layered with different dust and mud colors, pigments and other weathering techniques simulating dust and caked-on mud. I tried Tamiya’s dust and mud weathering sticks as well. I pushed the stick onto the surface, and used a wet brush to spread the paste around; it’s actually pretty easy method yielding realistic results.

I installed the tracks, and glued the rubber side-skirts into place.

I added AK’s Chipped effects in two layers, and waited again for things to dry. It took about an hour or so, and then I painted the tank with the same OD Green as I applied to the lower chassis.

I kept adding tan and yellow to the base color, and kept layering it onto the tank from the top of the tank; I wanted to lighten up mostly the surfaces that are illuminated by the sun (and which are normally more faded, anyhow). Adding yellow to the base green yielded a pretty nice Russian green, leaving the original color in the recesses.

I waited about thirty minutes for the paint to dry, and started to create the worn-off, chipped paint effect using a wet, stiff brush. I applied some water onto a small section, waited a bit, and used the stiff brush to wear off some of the top layer. (Sometime I managed to rub the paint off to the resin; these sections were retouched with primer.)
The chips on the rubber parts revealed a dark grey color, corresponding to the rubber; chipping on the rest of the tank showed different hues of dark brown representing rusted metal.

Once I was happy with the amount of paint chips, I waited for the tank to dry.

True Earth has a couple of filters in their product lines; I bought them a while ago, but had no luck with them so far. (I did work out you needed a very flat surface to apply it; the surface tension tends to pull the filter into droplets.) I sprayed some dark aging and light aging filters on some selected areas without diluting the product: around the turret, on the lower part of the turret, on the bottom of the tank; the effect is not as smooth as I wished it to be, but it does produce an interesting discoloration here and there. Not what I was going for (I was lead to believe applied it would look more like a darkened patch paint with a smooth transition), but a good one nevertheless. (It’s just one of those things: a product that promises easy and spectacular results turns out to be not so easy to use after all. The thing is if you need to have a learning curve to use something to make your job easier, it does not necessarily fulfil its promise.)

I applied traditional dark brown oil filters on the bottom part (with the side-skirts), and a light brown filter on the top. Another filter, bright yellow this time was applied on the top surfaces only. The tank was given some time to dry (a couple of days) and then I tried something I wanted to try for a long time: Tamiya transparent paint as filter. I used green on the bottom parts, which were supposed to be darker, and yellow on the top again.

After two days of letting the tank dry I sealed everything with a coat of gloss varnish, which was followed by a dark enamel pinwash.

The overall effect is quite nice; I managed to get that yellowish-brownish green I was going for. 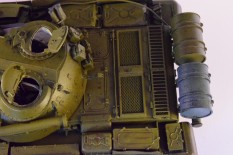 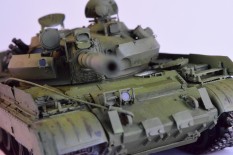 The tank is now looking like an actual vehicle…