So the saga continues. This is, by far, the most complex build I’ve attempted: several aftermarket sets are used parallel so mistakes are a possibility. Well, mistakes have been already made.

I’ve finished up the interior finally; the CMK set is done. There are considerable differences between the interior of the T-55A and the T-55AM I’m building with the Miniarm set; however I will ignore these for the sake of my sanity. To be honest it’s difficult to find good quality references for the interior of the AM, and this is the point where I give up; it’s a hobby after all.

The hull interior was relatively simple to finish; as I said in the previous post, there are a lot of shortcuts in the CMK kit, but then again, you can argue that most of it will not be visible, anyway. The driver’s station is especially devoid of extra instruments and whatnot you can see on photos. These videos by Wargaming are really useful: one is Chieftain’s “normal” inside the tank one, the other is a pretty cool virtual video. There is also a really good one here.

I also finished the turret interior. The bottom of the turret comes as a resin replacement; I did not realize it in time but the turret ring of the Tamiya kit is actually narrower than the CMK turret’s ring. This means cutting; not the best thing to do with all the fragile PE around, so make sure you do it first – unless you like challenges as much as I do. 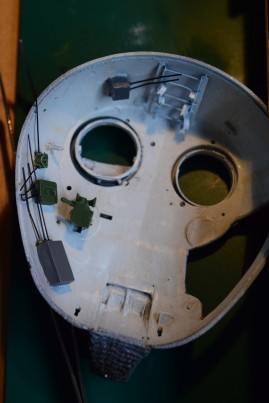 The gun, the turret turning mechanism, radio, different electrical boxes, the handle, etc. went in fine. I took some liberties and used some parts from the Verlinden T-62 interior set -periscopes and whatnot. I also did some cabling using soldering wire painted black. They were placed mostly using a creative licence – the actual tank has way more cables all over the place. Once all was in place, I used some diluted filters on the white -mostly light browns, and added streaking to the sides with very subtle rust colors. Did not want to make it look like it was standing abandoned for decades, but I did want to add visually interesting details. Real tanks are remarkably free of rust and rust streaks; it’s a balancing act.

Once the bottom of the turret was safely in place over the top of the hull, I started to attach the Tamiya parts for the exterior. I have to say it was a joy compared to the aftermarket set- finally everything is clear-cut and simple! Until you realize you need the next conversion set, and now you have to figure out what’s needed from the Tamiya kit, and what needs to be replaced and altered. I also noticed I was a bit hasty closing in the hull- I should have fitted the road wheels and the tracks first; it will be a bit more difficult with the mud guards in place. Well, that’s a headache for later.

The Miniarm instructions are not very good, and sometimes they just don’t warn you about minor things, like the need for filling in certain holes on the Tamiya hull. The problem is in the front: the added frontal covers most of the front, but you need to fill in two small holes. It would have been simpler if I realized it before I glued the fragile plastic parts 1 mm from the holes in question. Oh well.

The mantlet cover also comes from the Miniarm set, which interferes with the CMK gun breach making it impossible to put the top of the turret in its place. The simple solution was to cut off the front of the gun breach. Of course trying to fit the turret, and figuring out the problem meant that the delicate PE parts of the ammo holder on the back of the turret got damaged. Frankly at this point I’m not sure I’ll fix them; very little will be visible anyhow. Another issue for the next day will be the CMK coaxial machine gun; it just does not line up with the Tamiya turret.

I also realized I made a mistake at this point with the loader’s hatch: I used the CMK replacement instead of the Miniarm one. They are slightly different, but what’s done is done. The fuel tanks are provided by Miniarm, too, but the casting blocs are very thin; it’s not easy to saw them off. I’m also not sure why some tool boxes are replaced, and why others are kept from the Tamiya set… Oh well. 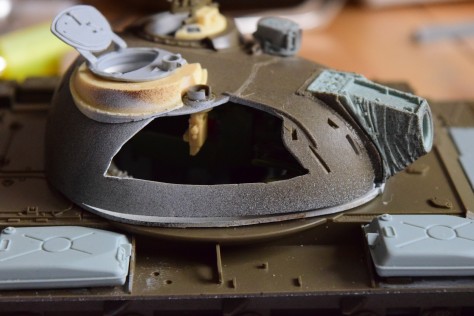 So here we are now: the model now resembles an actual tank. (My wife says it looks like a sad, dopey-eyed vehicle.) Some detail painting is left in the turret interior, and then I can finally close it off.

I finally gave up, and bought Eduart’s engine deck grill set for the build; I hope it’s the last expense I have this with this model. It really annoys me Miniarm did not provide a set; after all, if you offer a conversion, you might as well throw in some improvements, too, saving costs for your customers. As I said the set is not cheap at all.

The next few steps will be the most painful ones: itsy-bitsy PE everywhere… That’s a story for the next post. I’m really looking forward to the painting phase.