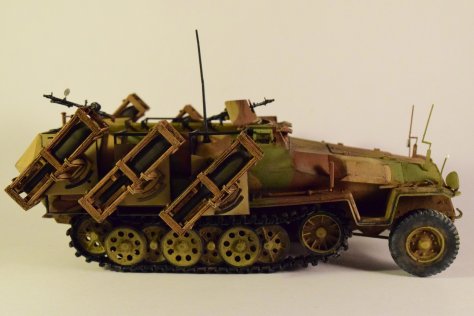 Another ghost from the past. I was really into the 251 series; the angular form of the halftrack looks pretty futuristic and the endless modifications make it a very interesting platform to model. For two or three models; after it does get a bit boring to assemble the same base over and over again. This was one of the reason I’ve switched to 1/72 scale when building these vehicles; the other was that I moved to the UK into a student housing, and had no access to my compressor and airbrush. The results of my formative years in grad school were posted in three posts (first, second, third).

However, this was the very first Sd.Kfz 251 I’ve built. It was still back in Florida, and since I really liked how the Bellowing Cow looked like, I wanted to start with it. There were several vehicles the Wurfrahmen rockets were launched from; the 251 was the most prominent one. (I’ve built two others: a captured French tank and a small tankette.)

Most of the build was finished in Florida; however life interfered with my plans, and I had to pack up and move. The model went into a box, and stayed there for almost a decade. Only lately did I unpack it, brought it to the UK with me, and finally finished it for good.

This DML kit has been an great experience to build. I can wholeheartedly recommend these Dragon kits to anyone. I merely needed to finish the paintwork, attach the rocket launching frames and other small parts, and weather the whole thing; a couple of hours max. 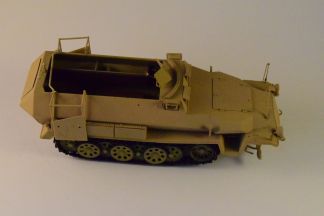 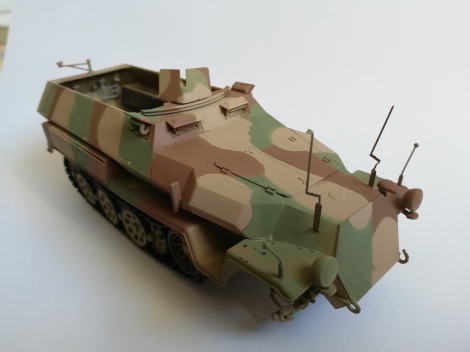 I used silly putty to mask off the dunkelgelb areas, and applied green and brown lightened with the base color in succession; I have to say I’m pretty pleased with the results. I applied streaking, filters and washes as usual, and then went on adding various layers of dust and mud. The interior also received a lot of dust, and I added small pieces of equipment to make it look more lived in. Unfortunately back then I did not add the rifles into the racks, so they remained empty. 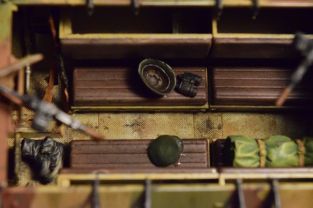 And with this I declare this halftrack done. I was itching to finish it for years now, and I can finally put it in a display case; the experience was the polar opposite of what I had with the Sd.Kfz250 Neu I’m also finishing. One more down; two more to go. Time is pressing; apparently another cross-continent move is in the plans in the near future.