This is an interesting part of the armor model world: the 1/144 kits by DLM. They are small little gems; it’s a shame that they disappeared from the market. If you have a chance, grab as many as you can. The presentation, the level of detail, the ease of assembly are all just top-notch; these kits provide a nice break from the 1000+ part 1/35 monsters I sometimes get involved with. For this scale you still get moulded-on detail that rivals some 1/72 kits, and also PE, and slide moulded gun barrels with holes in the muzzle breaks. Thankfully you don’t get individual tracklinks.

I’ve built several of these kits in the past: a Leopold railroad gun, a
15 CM S.I.G 33/2 (SF) Auf Jagdpanzer 38(T) Hetzer, two Tiger Is, and a Jagdpanzer IV. I’ve also built Takom’s P1000 Ratte, and the two Maus tanks that came with it. Since the Maus was not featured here before, and it finally resurfaced from the storage box it’s been languishing until now, I thought I’ll give it some time in the spotlight. 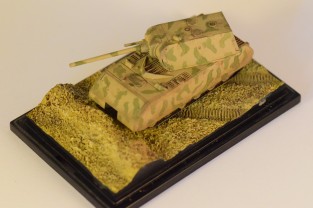 I’ve used a pre-fabricated case for this model, and since the tank is so large, this was the only way to display it. It does look like it took a handbreak turn to get hull-down.

All the display boxes were bought from Ebay; they are brilliant for small 1/72 or an average 1/144 armor model.

And since I was taking photos of older builds, I took some more of the Tiger Is; hopefully the macro lens brings out their details a bit better. 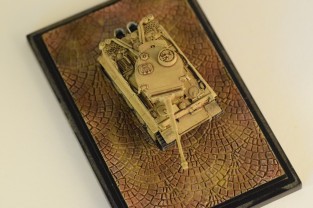 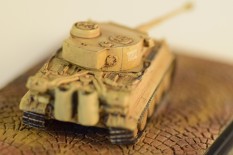 I love these little guys. It’s a shame they are difficult to get, but Dragon’s 1/144 series of armor is just really, really nice. The detail is astonishingly crisp (many 1/72 kits have softer, worse detail), the assembly is simple… the best quick-and-dirty project you can ask for. In less than an hour you get two models built; a couple of hours more, and they’re ready.

I have built a couple of these kits over the years; the Jagdpanzer IV has been featured previously. (I built their Leopold Rail Gun, and the Karl Morser as well. All of them are excellent little models. If I can, I’ll get my hands on a couple of more.)

There’s not much to tell about the construction. The tanks are made up from 5-6 parts, most of which are already separate

d from their sprue, so you don’t even have cut them off. The only problem I found was with the photoetch engine grilles of the Afrika Korps version. (Yes, these models come with photoetch.) The molded-on air filter for the engine goes across the engine grilles, so it’s not possible to install the PE screens… which is kind of annoying. The other issue I found was that this very same tank is presented with steel-rimmed roadwheels -I think. In this scale it’s difficult to tell, but the other Tiger has definite grooves set onto the sides of the wheels, signifying the rubber tires. Since this was missing in the Afrika Korps Tiger, I assume it’s supposed to have the st

eal rimmed wheel setup. Which is historically incorrect. (Both Tiger I.’s are from the early series, which came with rubber tires.) The tracks are given as flexible bands; unfortunately one of them broke (the fit is really tight).

After an aborted attempt with a paintbrush, I did the painting steps along with other tanks to be able to rationalize the use of airbrush in such a small scale… It would have been a bit silly to fire up the compressor for two tiny models. Getting them

done on an assembly line, however, allowed me to get a nice finish on the paintjob in the simplest way possible. (It IS hard to achieve good results with paintbrushes. Not impossible, but hard.) The tools and cables were pained very carefully with the edge of a very thin paintbrush. I made sure the brush held only a very small amount of paint to make sure there would be no run-offs from the delicate details; this was a hybrid version of brush painting-drybrushing… the results are not perfect, but they would do.

The models were primed black, and then I used sand/tan, and German gray/tan to give them their final camo color. These colors need to be lightened significantly to account for the scale effect – I used tan for this purpose. (White is not ideal for lightening

a color; it makes colors look flat and plain.) Once the decals were dry I sprayed semi-matte varnish on the models to protect them.  The only finicky thing to paint was the rubber tires of the road-wheels.

Weathering was done very lightly. Due to the scale of the models, subtlety was necessary. I used thin brownish paint to do pin washes, which did bring out the details nicely. The wash was light both in color and application; after all the panel lines would not be very much visible in this scale. (This is a matter of taste -and the purpose of the model. For example Warhammer 40k models usually go for the heavily accented panel lines to show contrast.) The same goes for the dust/mud. If you see apparent dust on the model, it would mean the real vehicle would have been probably covered by  dust centimeters thick. I used a brush to layers of earth colored pigments dissolved in water onto the sides and top, and once dried, I used a stiff brush to remove most of it. Since I put these guys into display cases, I did not use any fixer. As a final touch I ran a soft leaded pencil over the raised details, rubbed it lightly against the surface of the mud guards; this gives a nice metallic sheen to the model. Paint chips and rust patches were not applied (as they should not be visible in this scale).

I got some tiny display cases on ebay, so keeping them safe from harm and dust is not a problem. The Afrika Korps Tiger got the cobblestone street base, and the gray Tiger got the grassy one. I added quite a lot of earth colored pigments to both base to make them look less artificial. (The green was especially plastic-like with the uniformly colored mud.) Unfortunately I don’t have my “proper” camera with me, so the photos are not the best; I’ll try to remedy this issue later. (I’m  in the middle of moving residences.)

I always liked the look of this camo pattern, so I decided to finally build one of these tanks. The problem was I only had the Ausf E version in 1/72, and did not wish to buy yet another Tiger model. ( have two more in 1/35 waiting for me in storage at home.)

It was kind of fortunate that I did have this particular kit, though, because it has a lot of parts to build an early version (the largest exceptions were the road wheels, which were all-steel). I got the toolbox leftover from a panzer IV conversion, swapped the road wheels from another DML Tiger (as I said I did have more of these kits than it’s healthy), and made some efforts to backdate the kit to an earlier version. Purists will find it lacking, but I am not a purist, so we’re in luck. I just wanted to do the camo.

Once the build was done, I painted it panzer gray. Since I would be heavily weathered, and most of the gray would be covered with the remnants of the whitewash, I went for a deliberately streaked finish (less work now, less work later). YES, I KNOW THE SHOVEL SHOULD NOT BE THERE. I like the way it looks, ok?

The next (less fortuitous) occasion was the leaving of my (then) girlfriend. She was moving back to her country after finishing her degree, so she was leaving most of her stuff behind. Hairspray included. (If you want to try this technique, don’t let your girlfriend leave. Easier just to buy the damned can.)

I was a bit apprehensive how it would work out, but I covered the whole thing with hairspray. It became somewhat sticky, and very shiny. After waiting a week or so, the stickiness disappeared, but the shine was still luxurious, just as the advertisement said it would be.

Next step was the whitewash. I used Vajello’s white primer, and applied with a brush. This is why I was worried, because most of the time the layer after the hairspray is airbrushed -I was worried the water in the paint would already dissolve the hairspray below. I chose the primer because it was really thick with a good coverage. I left the approximate areas clear of white.

On top of the white I used some brownish colors to lightly drybrush the larger areas: mud and dirt staining (and being washed off) the vehicle.

Next step: bring out the cotton swabs. I wet them (not too much), and started to rub them against the surface (very carefully). Sure enough, the paint started to flake of, like a charm.

At this stage the contrast by the  wear and tear looks a bit too stark: the gray is too clean. After drying I sprayed a matt varnish over the tank to seal the hairspray.

Next step of the weathering process: oil filters. First-  white. I put drops of the oil paints onto a piece of cardboard, and left them there for about 20 minutes to draw the linseed oil out. Using a toothpick I put dots of white all over the model, and then a flat, broad brush wetted with mineral spirit was used to remove most of the paint with downward motions. This deposited a very fine layer of white onto the surface.

After drying the same was repeated on the lower chassis using browns (burned umber, brown). A soft pencil was used along the edges to give it some metallic shine, some pigments (white, and different mud colored ones) on the running gear and the tracks, rust colored pigments on the exhaust pipes, and I called it a day. All in all, it looks pretty good for its scale.