Now this mini came out as a disappointment. It’s entirely my fault; the mini is awesome, as you can see- and the unpainted, assembled model looks incredible. Too bad I can’t paint. 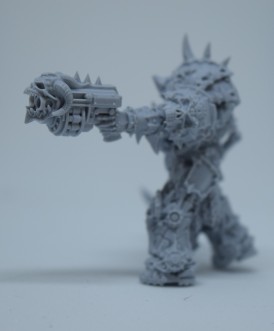 The only thing I like is the human hide cape; that part came out well. As with yellow, it seems like I really have hard time painting red. And picking up all the tiny details is proving to be impossible. Some serious steps are needed to develop my painting skills for sure. (OK, the camera does not give a fair image of the mini, since you normally do not see this close, but still.) 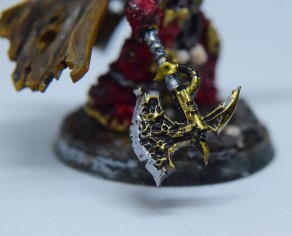 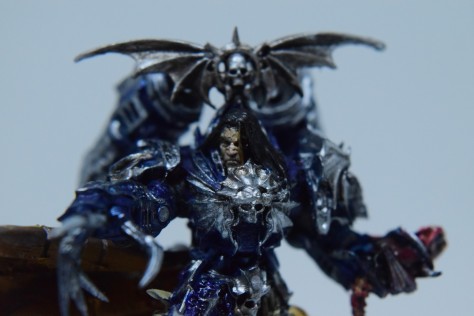 Grim Skull Miniatures have issued a couple of really cool alternatives for WH40K characters over the years. This one is obviously the Primarch of the Night Lords legion, Konrad Curze. He is a mixture of a psychotic Batman and Maugli; a Primarch who grew up alone in a crime-ridden society, and obviously has serious mental issues. (I guess the eviscerated body he is holding and the human skin cloak kind of hints this.)

Forgeworld has its own version of him, which is also pretty cool (and I was about to buy it when this model came out), but I honestly like this one better. The filigree on his armor, the face and the pose are just right- not too over the top, but still very much showing his character. I may still get the Foreworld version later, although I will have to start taking learning miniature painting seriously. 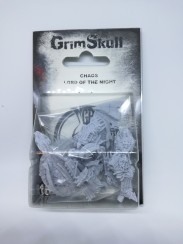 In short: the filigree does not leave too much continuous surface to work with, so I just painted everything the same shade of dark blue (mixed with Vallejo’s metallic medium), and then I painted the raised parts first with Vallejo’s oily steel, and used AK Interactive’s True Metal Steel to create shining highlights. (Looking at the photos, some adjustments are needed still.)

The face was first painted white, then added a glaze of bone, and then a very diluted brown wash. No, I did not paint the eyes; I was happy it came out as it is.

The cape got a few layers of snakebite leather, and I used several layers of different filters on the different sections to create slightly differing shades. Once done I used the base color on the stiches. 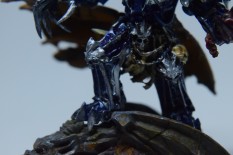 One mistake I made was to attach the jump packs upside down. It is a simple mistake, which was not really my fault (yes, that age old excuse): the compressor blades of the engine/jet/whatever it is that provides propulsion are supposed to be on the top, on the intake side, and not on the bottom – so this is how I installed them.

OK, there are a lot of minis lately. The reason is now I have about two hours a week, mostly in the evenings, to do hobbies, and I try to do things that are not involving toxic things, such as plastic glue or oil paints, since I prefer to stay close to my daughter.
So now is the time to finish all those older projects, and more importantly, learn new techniques.

I’ve featured a lot of Grim Skull stuff before on this blog; I do like the aesthetics of their models, and some are actually cheaper than the official Wargaming minis.

This particular set features the Thousand Sons Terminators. The latest WG Scarab Occult terminators look great, don’t get me wrong, but these guys rock. The whole Egypt theme is taken to the limit with the intricate embellishment of their power armor, and more importantly, the animal-head helms. Even if I did not like the back story of the Thousand Sons this would be a must-have set.

I used a set of Forgeworld WH30K Cataphractii terminators, I grabbed cheap on Ebay for the conversion, but I think any terminator would work. (The WH40K Tactical Dreadnought Armor looks a bit different, and I think is slightly larger.) The arms were from a big bunch of spares I also got from Ebay for cheap. (Keep an eye out on parts; you can get a big box of everything for almost nothing, and these provide endless sources for conversions. Ironically I suspect some of the weapons are from a Space Wolf Terminator set.) You will notice there are only five figures instead of six- one of the guys I gave to a friend to play with. (Here’s someone using both WG terminator and Grim Skull sets together for size comparison. The Forgeworld Cataphractii Terminators are noticably smaller.)

They were painted the Thousand Sons cobald color (which is not really cobald), and used AK Interactive’s True Metal gold and brass to paint the gold parts. The intricate patterns meant lots of fixing errors… I chose not to paint the tabards. I don’t particularly like the idea of loinclothes on a power armor, plus I was getting to the end of my ropes with the figures. Nevertheless I might come back later and paint them.

Again, my skills as a figure painter are not exactly stellar, but here you go. At least there’s a lot of room for improvement. 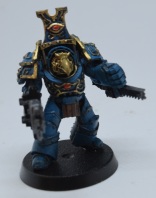 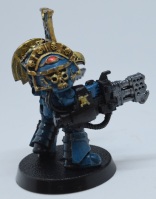 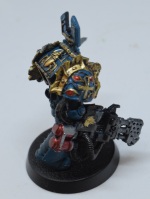 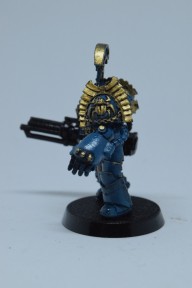 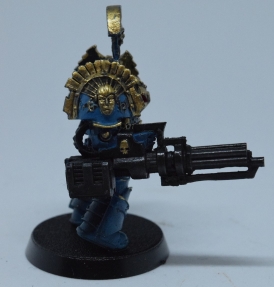 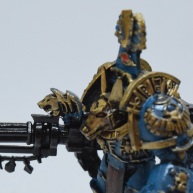 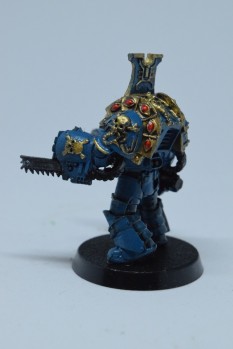 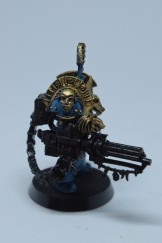 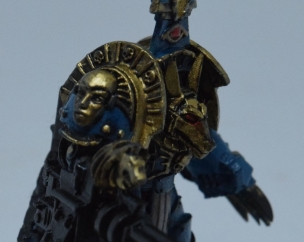 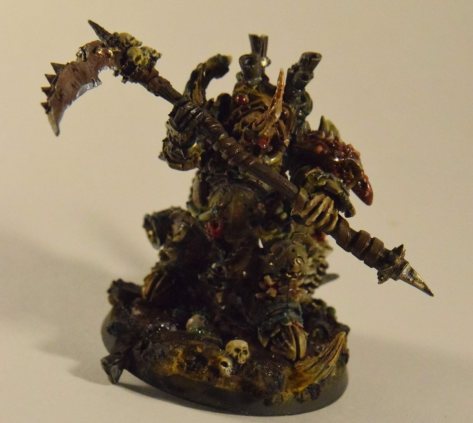 There is a small cottage industry focusing on producing figures and other accessories for popular tabletop games. Warhammer 40K is no exception. One prominent company producing resin alternatives and conversion sets is Grim Skull Miniatures; their Hive Bringer (khm… Tyhpus) is the subject of this review.

I mostly choose characters with interesting, intriguing fluff, but honestly Typhus is a d”ck, and there is no way around that. The miniature looks awesome, though, so in my shopping basket it went. 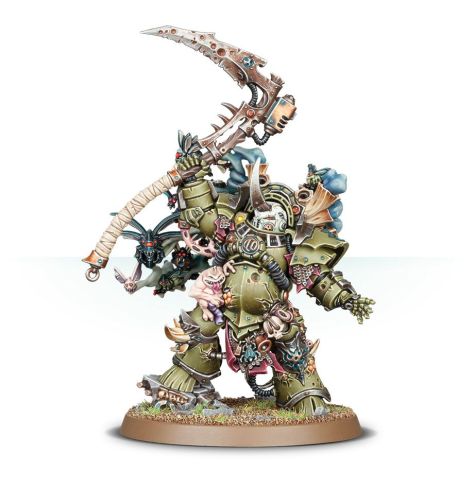 Games Workshop has a newly issued (plastic) chaos-corrupted version of Typhus, so there are definitely choices out there. Their Typhus looks really nice, but I really can’t be bothered about the silly little deamons crawling all over him… I mean I know it’s a silly table top game, but there must be some limits.

This particular figure by Grim Skull is absolutely gorgeous. He holds either a scythe or two sickles (these held in reverse, John Woo style), and he definitely looks corrupted. The detail and definition is simply superb. All the cysts, boils and blisters are lovingly re-created, alongside with the horns sticking out of the cracks of his power armor. 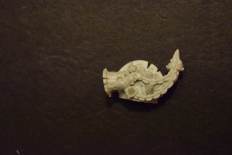 The figure comes with a base which is similarly well detailed with the assortment of maggots, skulls and horns.

The assembly is a breeze; you have to attach the arms, the shoulder pads and the weapon(s). If you elect to use the sickles, the position of arms is less than important; however to line up properly with the scythe, you have to be very careful to make sure the arms are in the correct position.

The really cool part- at least I found it fascinating- is that one of Typhus’ hands is bare… you actually get to see the skin of a corrupted daemon prince under the armor.

As with most figures, painting is the difficult part- and I do admit I’m not an excellent painter. (My main interest is armor models).

I found that glazes are great to produce an uneven, dirty and grimy looking surface. Previously, with Mortarion, I used glazes over black primer; this time I decided to use a similar approach over white primer. I used several shades of brown and green glazes (prepared using Lahman medium and acrylic paints) to give the armor a stained, corroded look. The parts of the armor I wanted to appear bronze received a green base; I chose two green colors that are close to the color of oxidized bronze. Later on I realised I should use a dark, metallic tin color, and layer bronze and oxidised bronze colors onto it. 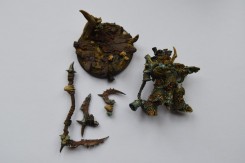 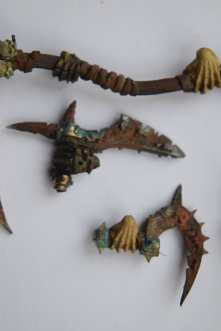 The blisters and pustules were painted with a yellowish/pinkish color, and received several orange-ish/reddish glazes; it managed to convey the inflamed, blistered, sick skin.

I used some Vallejo diesel fuel stains and engine oil to simulate stuff leaking from our corrupted Astrates. In short, this is a great looking miniature. I do not play WH40K, but I do enjoy occasionally paint the minis I find compelling. Some I want to paint because I like the character’s back story, and some, because they look cool; Typhus belongs to the latter group. 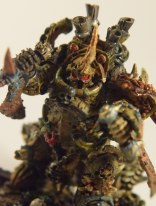 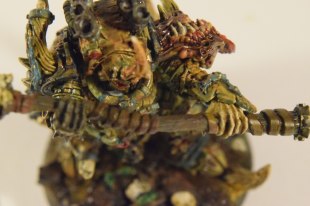 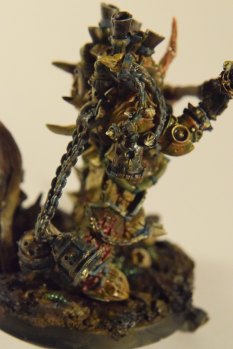 (I did a pre-Heresy version of him, too.)