I was curious how some chipping methods compare, so I did some experiments. Since the old hairspray I used ran out, and I could not get a similar product, I switched to the AK chipping fluid. (Not all hairsprays are the same when it comes to chipping; if you find something that works, stick to it.)

I also wanted to see how the Windex chipping technique works, and what the Mig Ammo washable white paint does. It’s not a comprehensive tutorial by any means, but I hope others find it useful.

There’s a nice summary of the hairspray technique on another blog, so I won’t be taking up much space with it. It essentially works by forming a water soluble layer between two paint layers, which makes a chipping effect once water is applied and slightly macerated with a stiff brush or toothpick. It can be applied to simulate paint chips or worn white wash; I used white in this case. With the AK Interactive product there’s a time factor: the earlier you do the chipping after the paint is dried, the larger the chips are; the longer you wait, the more difficult it becomes to remove the top layer. This can be used for your advantage, as it also allows you to use it in conjunction with the Windex chipping technique.

This is something relatively new. I’ve read about it in the Single Model series (02) by Rinaldi Studio Press. This technique depends on the fact that ammonia dissolves Tamiya (and supposedly similar acrylic) paints. You essentially dissolve the top layer with a 1-3% ammonia solution. (Windex and similar cleaning products contain ammonia; you can even buy ammonia by itself, and it would work just as fine.) The higher the ammonia concentration, the easier you remove the top paint layer, so it’s worth being patient and using less concentrated solutions. I used to use Windex as a solvent and airbrush cleaner; it seems like it’s great for chips as well. The effect is much more subtle than the hairspray technique’s: it produces smaller chips, and the effect is more like rubbed-off paint.

It’s essentially a white paint that can be spray painted and then washed off after drying. It does not form chips as it is; it’s more like a whitish translucent overcoat. The paint should not be diluted much (one or two drops of water, tops), as it would spray very dilute. (It took a while to figure out why it behaves like a wash when I sprayed it… The Lowe I did was the test piece, and I had to try three times before I realized I needed to keep the dilution low. It’s quite thick, so some dilution is necessary, but not much.) I’m not sure it stays washable after a prolonged period of time; it probably does.

So I prepared my trusty Pnz IV mudguards with a green layer of paint, and sealed it with Dullcote. (So that it protects the paint from the ammonia.) The next layer was Tamiya’s flat white.

I divided up the segments, and got working. (I forgot to take a photo before I started to work on the AK Interactive chipping fluid. Imagine it white.)

I used a wet brush on the surface, and then gently a toothpick to nick the surface. The nicks were enlarged with a large, relatively stiff wet brush.

The resulting chips are giving a stark contrast between the white and the underlying green. 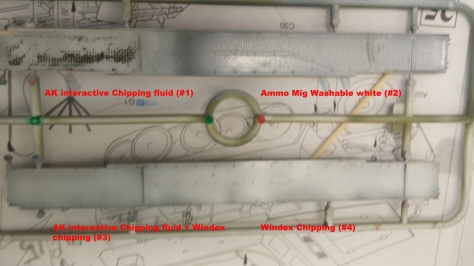 The paint is very thick and kind of shiny once on the surface (you can see this on the photo). After a little drying period, I used a wet brush with a downward motion to remove the paint. It got dissolved, and smeared over the surface. The residual paint formed an uneven layer over the green paint, making the surface look worn. No chips, but realistic worn effect.

I prepared a ~2% Ammonia solution using a kitchen cleaning product, and used a brush to wet the surface with it. I waited a minute or two and then gently rubbed the brush against the surface. For a long time nothing seemed to happen, but after a while I got a very nice, realistic chipping effect. It’s an important thing to point out: the effect is very gradual; for a while it really does look like nothing is happening. Some foam appears, but that’s it. Don’t push the brush down (now I’m rapping about modelling), as it might lift up the base layer as well. 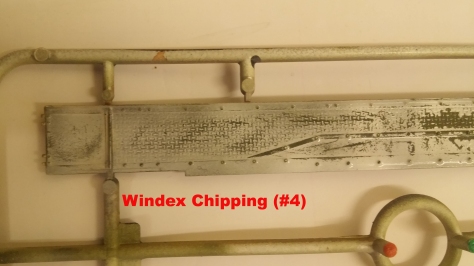 You can see the same technique used to recreate rust on the electric mule I built not long ago. The square parts are about 0.5cm long. Unfortunately the photo is not the best (the most interesting part is out of focus), but the effect can still be judged: tiny, minuscule chips and general look of wear-and-tear. Pretty good, I’d say.

The fourth section was first treated with the AK Interactive chipping fluid, did the chips, then waited a couple of days. (It was probably close to a week, if I recall correctly.) The next step was to use the Windex method on the same section, forming smaller chips. The effects are subtle next to the large chips, but you can see how the paint rubbed off the edges and other areas sticking out. It also formed very tiny little chips between the larger ones, making the effect a bit more realistic. The Windex effects complements the larger chips of the previous method quite nicely. Due to dissolving the white color, it also deposited some on the green undercoat, making the contrast less pronounced in some areas. (Not all and not evenly.) 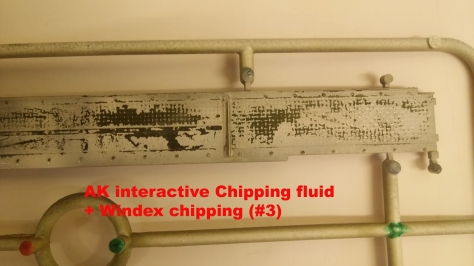 So there is it.

I think the washable paint looks good as a very worn winter whitewash on its own. If you use hairspray chipping for whitewash it would also be very useful to tone down the stark contrast between the underlying paint and the white on top.

The Windex method is great for subtle chips, but it also complements the larger hairspray chipping.

This, of course, is not limited to whitewashes; excellent chips can be done using a rust undercolor, or even a variation of the main color. (Green on green chips, camo pattern chips, etc.) Your imagination is the limit.

There are more than one ways to skin a cat, so these are not the definitive methods; there are other ones as well. AK Interactive just came out with a solution that makes any acrylic paint washable; the this opens up a large potential of uses from dust to worn paint. I have ordered it, so when I have some time I’ll see what it can do, and post the results.

(Here’s an imgur album for the photos- they are hopefully larger than the wordpress versions.)