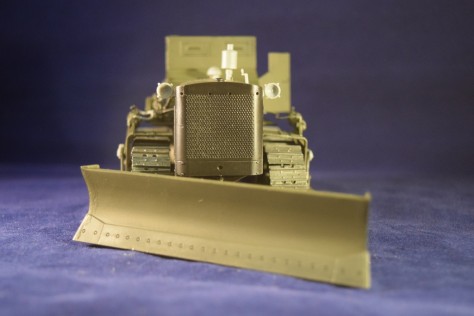 This is the third part of the review of the Miniart D7 Dozer.

Even though the cab will almost completely hide the operator’s station, I decided to weather it properly… 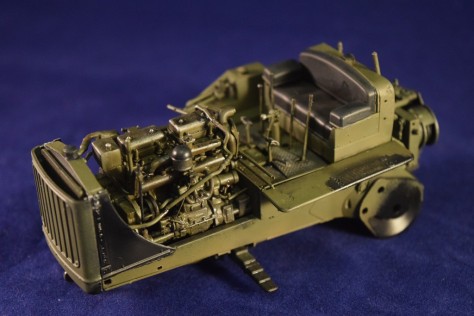 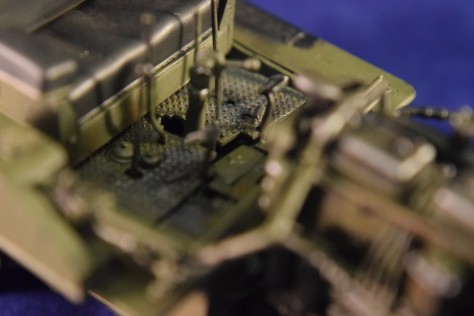 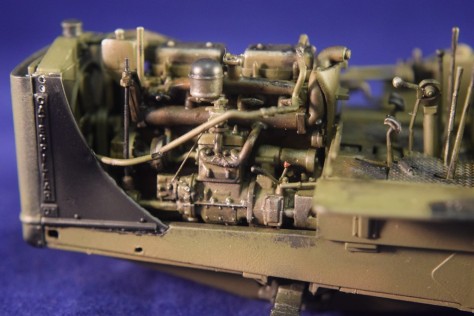 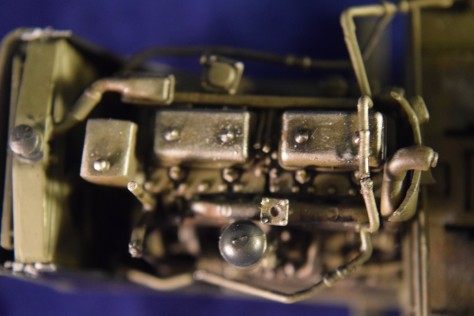 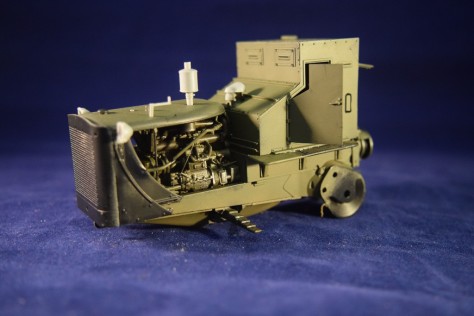 The tracks received a black primer coat first, and then were painted in a dark grey color. The metallic sheen came from dark metallic pigments rubbed on them; the parts that are normally subjected to higher wear and tear, therefore are usually highly polished, received some silver pigments. Once they were mounted onto the suspension I added a heavy brown wash, and once it was dry I added some dust, using brown pigments suspended in water, and some more silver pigments. 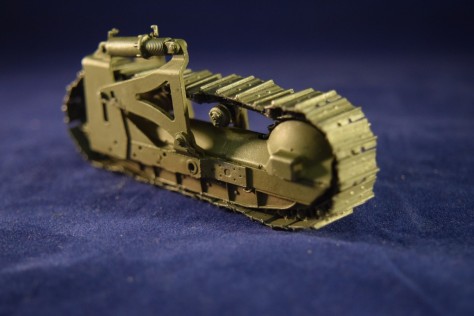 Just to recap from part one – I developed an immense (or unhealthy, depending on your point of view) fascination with the different versions and variations of the sd.kfz. 251 halftrack series at one point in my life. (Others do coke; I think I was still better off, although the costs were probably the same.)

I realized a lot of these models were available as conversions in 1/72, and the scale also offered one thing the 1/35 scale can never do: a reasonable time-frame of building. Imagine completing 10-13 models of the same type, putting together the same modules, gluing the same individual tracks, and you’ll have a decent image of a scale modeller’s hell. (At least my hell.) A disclaimer (again): unfortunately I had no airbrush at the time; and my skills with brushes are not as good as the airbrushing skills (which are, in turn, not very high either). So view the results with this in mind, please. (I also need to mention -again- that I used DML’s 1/72 251 model – I can only recommend this kit to anyone. It’s accurate, easy to build, the details are perfect, and it’s ideal for conversions.)

So to today’s topic: AAA vehicles. Funnily enough the Germans did not manage to stick an 8.8 onto this platform; the chassis was simply not strong enough. (I did build a lot of 8.8 based vehicles; most of them are on this blog, and some will be featured as soon as they are finished.)

That leaves us with the smaller caliber guns. Since Allied air superiority was an issue at later stages of the war, many different vehicles were converted into anti-aircraft gun platform. Some of these vehicles were purpose built, based on a chassis of an usually outdated vehicle, and a lot of them were converted ad hoc. There were even kits delivered to divisions which helped the workshops to do the conversion in the field. The success rate of these vehicles are dubious – for obvious reasons they quickly became the targets of ground attack aircraft, and they were not as heavily armored as the tanks they were protecting.

This version was equipped with a pretty cool looking gun with a small, triangular gunshield, which can be used against low flying airplanes or infantry for that matter. ModellTrans offers a neat little conversion set with turned barrel, and I have to admit it’s pretty nice. The attachment of the shield is a bit difficult, and you’ll have to add some styrene rods to the build yourself, but that’s just part of the world of resin conversions. (The moulding is pretty impressive; they managed to mould the handgrabs onto the shield.) More important issue, though, is that only one ammo storage rack is provided. I wrote a review about this conversion on armorama, so if you want to know more about the kit itself, you can read more about it.

There are instructions provided, which was a welcome change.

You literally just drop the gun into the hull, and you’re done with the conversion. No surgery, no major modification required.

Painted and weathered… (It was a learning curve how to weather 1/72 kits. Funnily enough it looks pretty good by eye; the camera has this tendency to expose the problems in a very brutally honest manner.)

To introduce this version I’d like to quote the review of this conversion.

As war progressed, aircraft needed a bigger punch. The Luftwaffe adopted heavier 3 cm cannons instead of the various 1.5-2 cm guns they have been using before, so there was a large surplus of the excellent Mauser MG151/15 and 20 cannons (15 and 20 mm respectively). Not to let the guns go to waste, the Kriegsmarine constructed a simple triple gun mount called Flak Drilling Sockellafette. This gun mount was adapted for the Sd.Kfz.251 to provide an anti-aircraft platform. They were available as kits for the troops to make this conversion possible on the field as I mentioned in the introduction. All benches were removed from the vehicle, and additional armor plates were installed around the sides. The mount itself was simply bolted onto the floor of the passenger compartment. Two ammo chests were placed in the back with a total capacity of 3000 rounds/vehicle.

The gun mount was a full rotating pedestal with a cradle assembly which housed three MG151s. They were mounted slightly offset to the right side to allow clearance for the ammunition belts and feed chutes. The shells and belt links were collected inside the pedestal. The guns were fed from three ammunition boxes attached to the pedestal itself. The center box was larger than the two others, containing 400 rounds in mixed HE, AP and tracer rounds. The two side boxes contained 250 rounds each. This arrangement was necessary as the middle gun was considerably more difficult to reload.

The gunner was sitting on a metal seat suspended at the rear of the gun, and operated the whole mount manually. The triggers were placed on the two handgrips. Early versions had reflector type gun sights, while the late ones used speed ring sights. (The armor shield and cradle assembly was different as well in these versions.)

The CMK conversion set is typical of the company: it’s professional, well designed, easy to assemble, but somewhat sparse on the details, and contains inaccuracies. (The review lists the issues I could find with the set.) The most important issue concerns the gun barrels. They are made of resin, and quite chunky. I’ve seen amazingly accurate resin barrels for the Modelltrans Luchs, so convincing 2cm guns can be produced using resin, but these ones really look like a couple of broom handles. This is when you buy an aftermarket set for your aftermarket set -a couple of metal barrels. The other problem is that the gun sits too low on its pedestal; the whole assembly should be much more higher to clear the sides of the vehicle. I’ve lifted it up considerably once I realized that it would sink under the sides. (The shields are way too wide as well, but this is not as noticeable.)

This was a purpose-built anti-aircraft platform for the Luftwaffe’s armored forces. (I know. Why they needed tanks is everyone’s guess. Goering wanted some cool stuff, too, and that was the end of the story. I think the world can thank a lot to the ineptitude and stupidity of the leaders of the Third Reich… looking at the success of the Mongols it’s a scary thought what would have happened if the German war machine was lead by competent leaders.) Anyway, back to the model. The whole crew compartment was radically altered to accomodate the 2cm Flak gun and the fold-down sides. All in all, it looks quite wicked I think.
ModellTrans offers a full kit of this vehicle. There are some issues with the kit: some moulding imperfection (which are to be expected), some accuracy issues (please read the review for more information), but the main problem is with the chassis itself: it’s different from the basic model. The bottom of the chassis is much more narrow than the original 251’s. I think it’s safe to say that it’s a problem with the model, and not a design feature in the original half-track, however it is an issue which you will not notice once the model is complete. The shields are very thin, and quite delicate -a very impressive feat in resin-making. As usual, instructions are somewhat sparse- they only cover the gun’s assembly. Using photos, however, it should not be a problem to build the rest of the model. (Of all the missing details I really think they should have included the rifle-rack on the mudguards, though. I’m planning to add it at a later time.)

So here they go. The three AAA vehicles in the display case. Since I’m moving about a lot, and don’t have a stable base of operation, I’m fixing my models in display cases -easy to store, easy to transport. It also protects them from accidental damage and dust.