The world of tabletop gaming has given us better and better detailed miniatures over the years, along with increasingly detailed universes through media like books, comics and computer games. One of my favorite is… 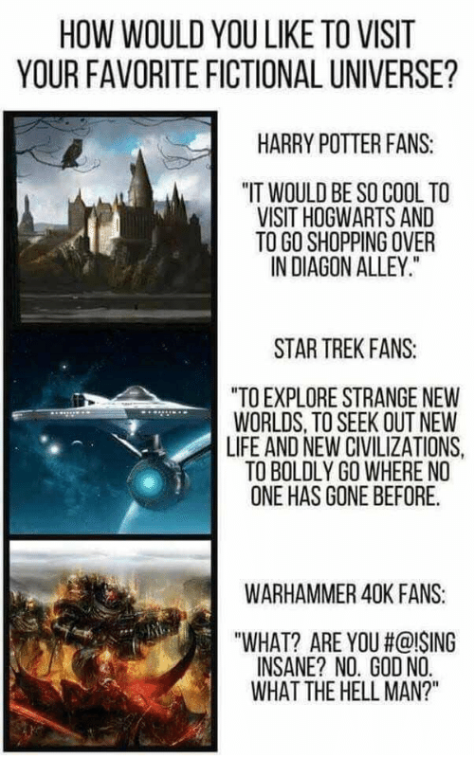 Warhammer 40K. The picture above will make it clear why.

There are enormous gaps in the “official” miniature offerings in the available fractions, and also what is available tends to be somewhat expensive. A lot of smaller companies spotted these gaps on the market, and started to produce similar-but-not-quite-the-same miniatures that are not available from either Games Workshop or Forgeworld, usually for a friendlier price.

Mortarion did receive an official figure by GW, and another by Forgeworld, but I did not like either of those versions. The WH30K (pre-Heresy or Herey era) Forgeworld model did not really resonate with me, and the daemon prince figure looks very different from the man he used to be, twisted and bloated beyond recognition. In case of Mortarion it is an issue. True, the Primarch of the Death Guard Legion had fallen to Chaos, and has been turned into a Daemon Prince since the Horus Heresy. However the lore makes it clear that he is the one Primarch (alongside with Magnus, possibly) who remained as close to human as possible. Grimm Skull Miniatures has issued a Mortarion model that can be used both as a pre-daemon prince Primarch before or during the Heresy, or as a full-fledged daemon-prince (essentially the same figure plus two big, leathery wings). Yes, you can say it’s just lazy marketing. However since he is the most human of the daemon princes, and fans still debate if he could even return to the side of the Emperor again, as his red brother did, there IS a good argument for Grim Skull Miniatures’ choice. 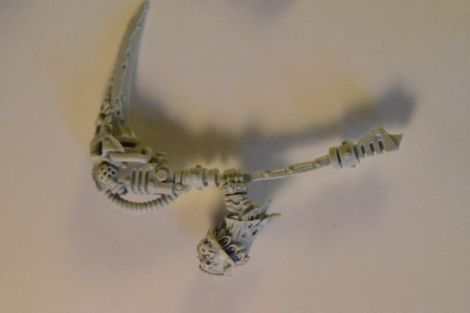 The figure- as all of Grim Skull Miniatures figures I’ve seen so far- is very well sculpted and detailed. These figures are close enough to the “official” GW/Forgeworld aesthetics, but they also differ enough to look novel and unique; frankly I quite like how most of their figures look. The overall outline of power armor mixed with twisting and turning organic shapes look the way I imagine the Chaos-touched warriors. Talking about Magnus: there is also a figure that looks suspiciously like the Cyclops, only Grim Skull took him towards the Maya/Aztec aesthetics instead the ‘traditional’ Egyptian. (I’m not sure what to feel about the overemphasised feminine figures though, but if you like Tau pin-up girls and sexy female chaos space marines, here’s your chance.)

Mortarion, or Morty for his friends, looks exactly like his description in the Horus Heresy books. A gaunt man in an ornate, baroque power armor, with a cape covering his head, and censers hanging from his armor on chains. He has his power scythe Silence, however he does not have his handgun, Lantern. This is a glaring omission of the model; the gun is a prominent feature of the Primarch. Otherwise I do like it better than the pre-daemon Forgeworld figure, or the daemon prince GW model; he does radiate a sort of dark, solemn majesty with his ragged wings and elaborately decorated, corroded armor.

He comes with a pretty nice base to stand on with a broken pipe leaking who-knows-what. (It must be something corrosive because there is a skull in it.) We do get two such pipes; I used the extra with another Death Guard figure.

The assembly of these figures is usually a breeze. I did not like the original pose, because Morty looks like a particular shepherd the way he holds Silence. I turned his arm a bit to make it look more dynamic, although the attachment point is not designed to hold the arm well at this angle. (A scythe is an unbelievably impractical weapon at any rate; at least he should have straightened it, a’la revolting peasants. I think the Death Guard really puts style over effectiveness, when it comes to weaponry.)

The big issue, however, was the wings. There are simply no attachment points where they can be glued to, and the surface touching the back of the figure is so small, it was difficult to secure them even with small wires drilled into them.

The painting stage is usually where these models are made or ruined, and I have to confess I’m not a master painter. My main interests are armored vehicles, so my skills at blending and painting small details by brush leave much to be desired. I don’t particularly stick to the “Games Workshop School of Figure Painting” with the high contrasts and very fine layering/glazing, either. Since I have the daemon prince version, I did not paint him in clean, pre-Heresy colors; he got the full grime, rust and corruption treatment.

I used Vallejo’s black primer as a first coat, and used Lahman medium to create glazes in various browns and greens. I kept adding the glazes in very thin coats until I liked the greenish-brownish hue.

The bronze parts were painted using True Metal gold first (on larger surfaces I dry-brushed it on to keep the black as shadows in the recesses), and then followed it with several layers of oxidized bronze green colors as glazes. As finishing touch I reapplied the gold on rivets, thin edges, and other surfaces where the oxidised metal would be rubbed off.

The different pipings on the armor were painted with dark blue glazes to create a slightly different color without too big of a contrast.

I was uncertain of what colors the wings should have: they look like a cross between an insect’s wing and a bat’s. I did not want them to stand too much out of the general effect, so they got mostly the same treatment as the rest of the figure. The wings received a purple glaze, and the insectoid wing structure was shaded with ochre and brown oil paint blended into the base dry; it does look slightly iridescent and chitinous.

The tabard/cloak Morty is wearing got a similar layering treatment, only in this case I used a white base and added mostly brown colors. As a chaos prince of Nurgle, the god of disease, he can’t really be expected to have a spotless, white attire. (Having one at all is pretty silly since it would get caught in everything and anything.) I added further highlights, shading and discolorations using oil paints. After weeks of drying it is still somewhat shiny… This is a good lesson on getting out the linseed oil out of the oil paint before using it. (Just put a blob of paint onto a piece of cardboard and wait a few hours… Next time I will not skip on this step.) Right now I’ll go with the “can’t you see it’s leather??” defence. It turned out a bit darker than I would like, but there it is. As I said I’m not the best of figure painters.

The base was painted similarly to the figure: several layers of dark grey and brown glazes over black primer, then a little steel and gold True Metal paint drybrushed on here and there. The rubble got a bit of a rust and dust pigments, and the bronze areas got the same treatment as Morty’s armor. 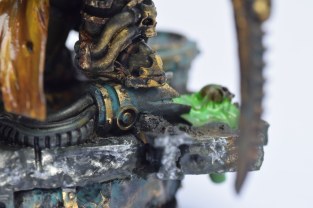