And the published review. (It’s probably worth checking it out if you want to build the model; I pointed out some issues with the model, and gave some tips for the build.)

Once the model was primed, I sprayed Citadel’s olive green (from the airbrush-ready range) mixed with Gunze’s yellow. The first coats had no yellow added, the subsequent coats had more and more stirred in, and I made sure I only lightly misted these on, focusing on the top of the vehicle. So the bottom of the chassis has no yellow at all, while the top received the most.

The model was fully assembled, so the tracks received some green paint; I simply went over with a black/antracite color to correct these oversprays. I found that it is quite simple and easy to paint models with tracks and all already installed, rather than trying to install the tracks on a fully painted model. The dark primer provides a very nice “shadow” to areas where the green paint did not get to.

I added the decals (one “Deliquent” decal was lost in the process…), and this is where I realized that there was not enough room between the grab handles to add the number… Something to look out for in your build. (I am not unduly worried about the turret, since I will use a different one.)

After a brown pin wash, followed with a black pinwash on the engine deck, I covered the model with semi-matte varnish.

I used Tamiya’s weathering sticks for dust and mud – again, this is not the end manifestation of the model, so I kept weathering minimum. (I found that using a wet brush to apply the product to the model, and then using a clean, wet brush to adjust the effect works wonders.) I painted the muffler cover using several rust tones, and used a silver pencil on the edges to give a metallic shine to the model. 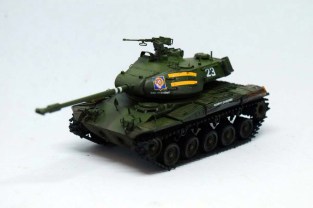 That’s pretty much it. I am thinking about magnetizing the turret so I can just switch it (a’la KV-220, T-150) once I finish the actual model I wanted to build using this kit.

Well, I decided to buy Armory’s new injection molded model, the Walker Bulldog. I have written a review of it on Armorama; when it comes live I will link it here.

My aim with the purchase was to do a conversion, I was not particularly interested in the Bulldog itself.

As I wrote in the review, the build was pretty nice; I found no major hurdles -apart from the tool rack which I just left off. I also did not install the gun lock since I will be using the chassis for a different vehicle with a different gun. There are some minor issues with the model, but none of them are deal breaking (and at least the gun is not assembled from two halves…) 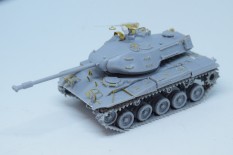 There’s an awful lot of PE coming with the kit; the smaller parts were glued on using white glue. The sink marks on the tracks are somewhat annoying but they will be filled with some mud at the end.

Next up: painting and weathering.

And then – when I buy the necessary supplies: THE CONVERSION.