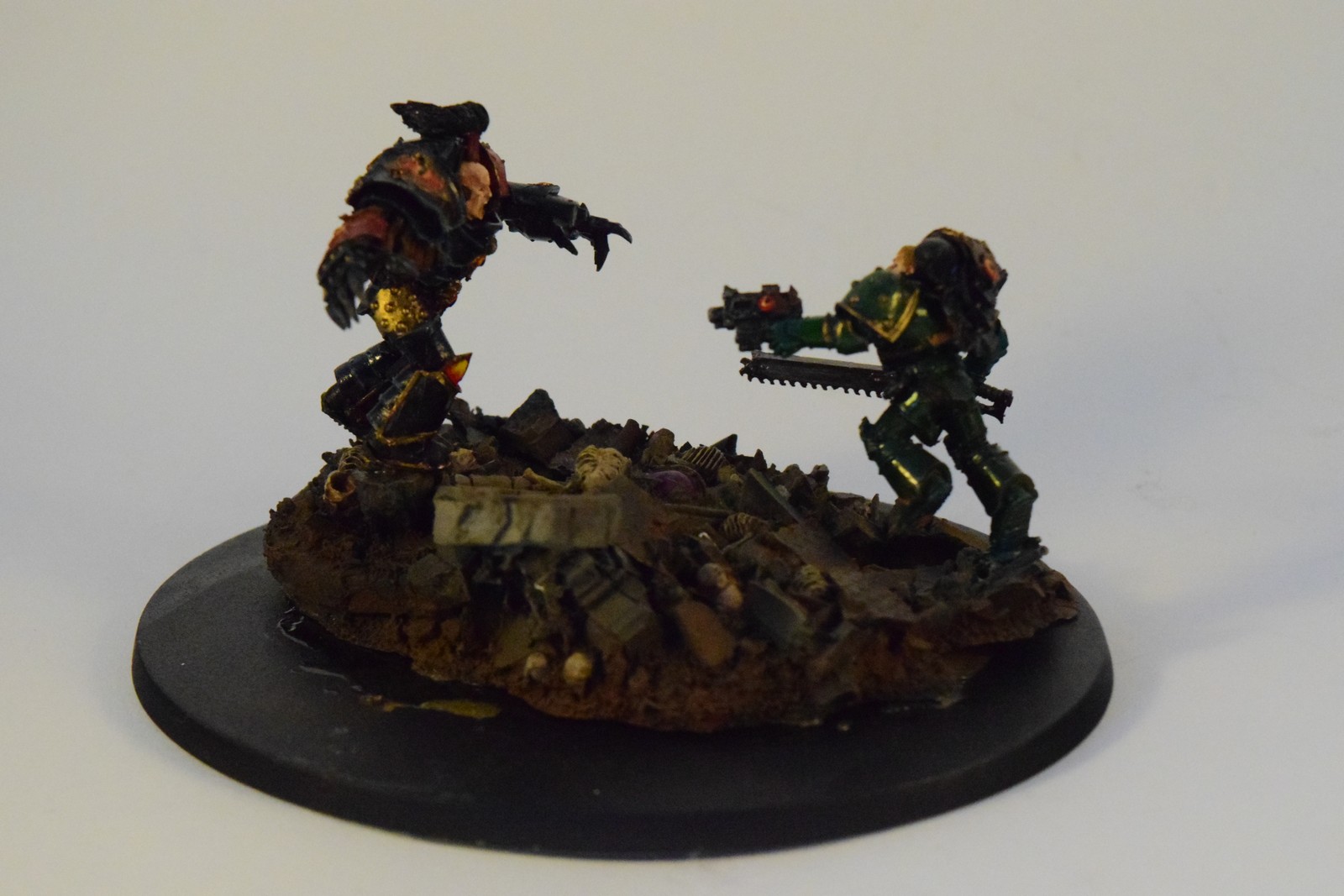 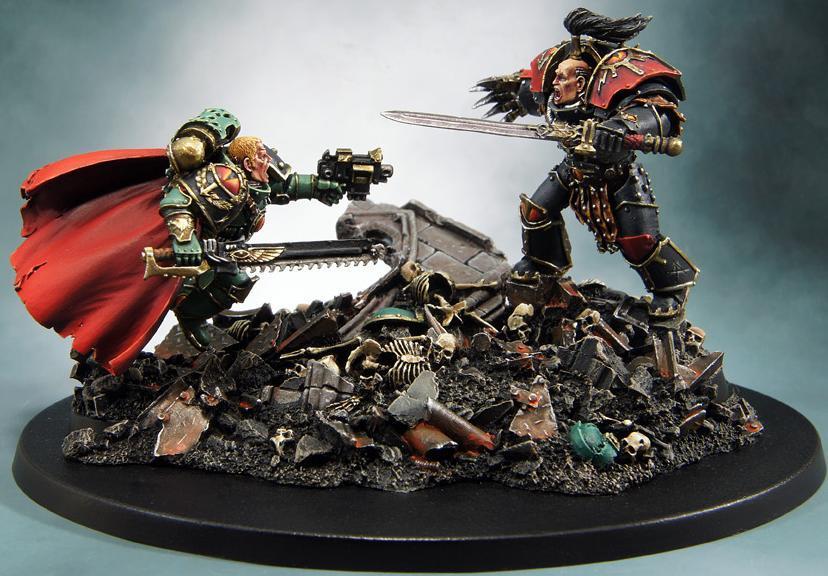 One of the most appealing thing in Warhammer is the plethora of weird-looking, over-the-top machines and other contraptions of war. Among those are the dreadnoughts – gigantic exoskeletons for Astrates warriors who are too grievously wounded for recovery. These half-dead Astrates are placed into a life-sustaining pod (sarcophagus), and connected to a dreadnought body which they can control using their mind impulse units.
Anyhow. They look cool.

OK, our first contestant is not a dreadnought per se. It is called the Decimator (not a very inventive name), and is sold by Forgeworld. It’s a war engine imbued with a demon by the Dark Mechanicum. Instead of a crippled Astrates, it has a daemon in it. Even cooler.

These are surprisingly cheap on Ebay (my endless source of used Warhammer stuff). The whole Dark Vengeance boxset is being sold separately, which brings the price down to about five quid. It’s supposed to be a maddened, chaos-corrupted dreadnought who is chained down until the time of fighting comes. He has became this strange organic-mechanical fused being, who is driven insane by this change. So he is suffering while he is slaughtering everyone, which, I’m sure, is a consolidation for all parties involved. I decided to paint him a member of the Black Legion, because red is a bit of a cliché by now. The bases in all cases were done using spares weapons and space marine bits -which (surprisingly) I got from Ebay by the bag. The earhwork was done using actual soil from Compton mixed with white glue, and airbrushed with some other earth colors here and there to give it some tonal variation.

This guy is a boring, run-of-the-mill Ultramarine. He was my first… To make him more interesting I did some surgery on an ultramarine figure; he is supposed to be a wounded Astrates being protected by his big brother in a firefight. The pose was surprisingly easy to do: just cut off the armor sections, and reconnect them using green stuff.

Death Guard dreadnought
This guy is my favourite. Out of all the corrupted Legions, the followers of Nurgle are the most unique. It’s a Forgeworld offering, and not even that expensive. If you’re lucky -or patient enough- you can get a used one from Ebay. I did. This meant I had to repair and repaint our friend. It was reprimed in black, and then successive layers of greens, olive greens, and browns were added using an airbrush. The final color-variation was provided by a lot of filters: burned umber, brown, green, and yellow.
Once all was dry the detail painting took forever. The boils were pained with deep red, and then added orange and yellow; the gun was painted with rust colors, the horns were painted in yellowish bone shades. The thing to keep in mind was not to use a single color for anything; everything was done in at least three-four shades.

This is one character who started out as a gigantic tosser, and ended up being an ever bigger one. With the Heresy what is most interesting is to see what drives people to turn against the Imperium. Sometimes these choices are agonizing for the characters who make them; and you cannot really help but feel sympathy towards them, even after they become a twisted caricature of their former self. (Think about Lorgar himself; or Khran, who already was featured here.)

Thypon (or later known as Thypus) has, however, never been a nice person. Always arrogant, always sneering, always self-righteous; it’s hard to find anything likeable about the guy. (He does sport some amazing beard, though.) Let’s face it, he is somewhat of a one-dimensional anti-hero.
Nevertheless, the Forgeworld figure is just incredibly good-looking. The heavy stride of someone in heavy a Terminator armour captured incredibly well. You can hear the footsteps, you can feel the tremor of the earth, and you can clearly see that this armour was not designed to be jogging in it. It also looks pretty realistic; my biggest issue with older iterations of Terminator armours is that they look unwieldy; just look at an old Games Workshop Abaddon figure to see what I mean. He literally is forced to keep his arms up in a threatening pose, because he cannot physically bring them lower towards his torso. (Which is good if you want to threaten someone, but bad, if you want to actually do anything else. Like moving.) The new Forgeworld Terminator figures -while it’s clear that the wearer will not do splits in them any time soon- look more realistic as power armours go.
The kit is also a good starting point for the character himself. This is the original state from which he got corrupted into a plague Marine, harbinger of disease and corruption. 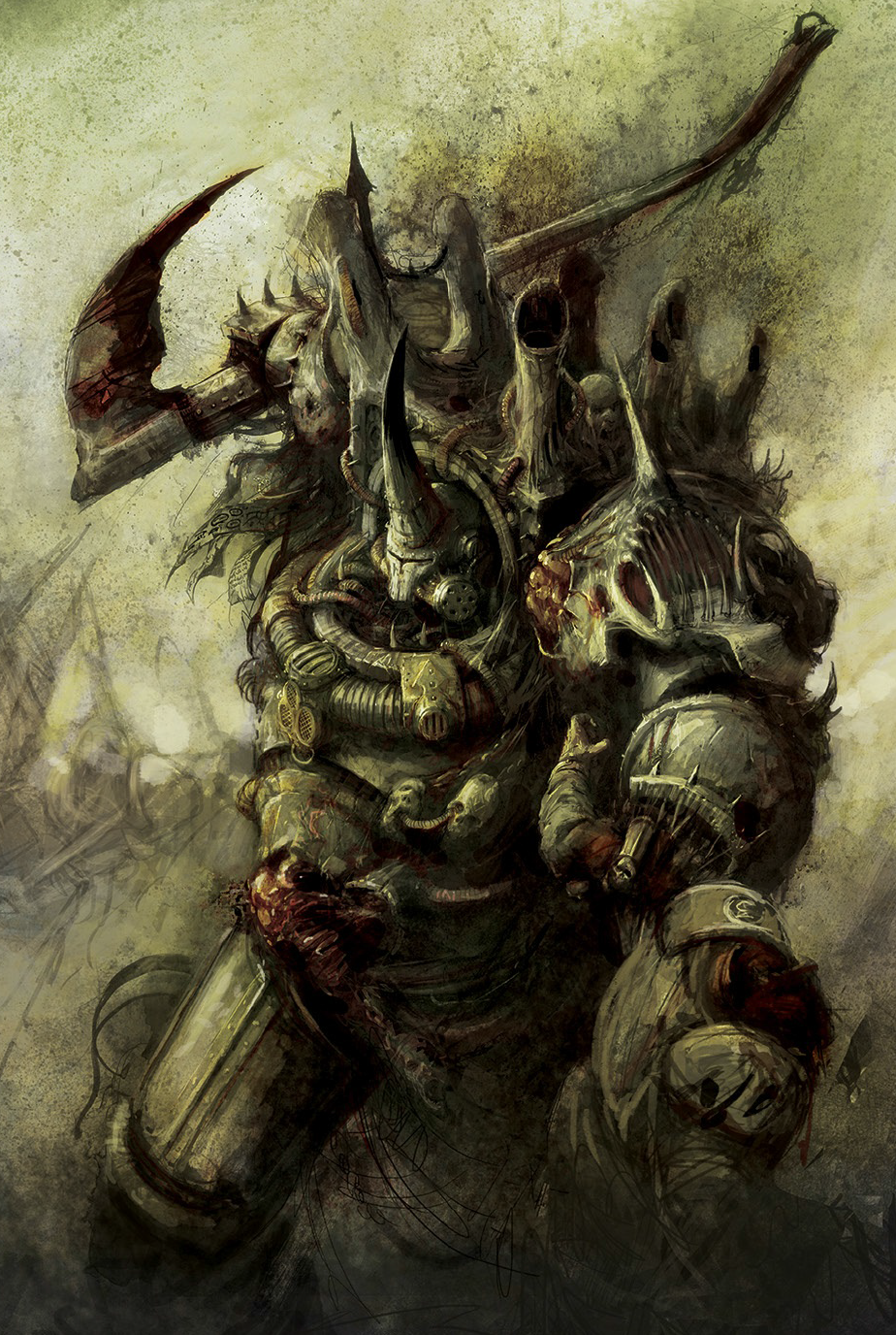 Citadel Finecast did come out with a Chaos corrupted Typhus before, and you can see the similarities between the figures.

The sculptor at Forgeworld used this figure as a basis, and he made an excellent work.
Since the Death Guard is under the influence of the Lord of Decay, Nurgle, they are quite foul creatures. I tried to depict the beginnings of receiving the favours of this Chaos god might look like: the originally granite-grey armour got a yellowish sheen, representing a thin layer of filth, quite possibly excreted by the amour itself. He has made his first step in the path of corruption. I’ve also used transparent paints I use normally to simulate fuel stains on tanks. One brilliant thing I realized was that the usual problem with washes (namely the wash dries in a way that the pigments in the wash flow towards the edges of the wet area away from the cracks, which look bad if you use the wash to accent shadows) actually look pretty on-spot with Typhon -after all, his armour does excrete some foul substances, which will dry in patches on the surface.
Scratches in white, and white highlights helped to bring out the details; I’ve also used very thin dark washes to further enhance the whole oily-filthy impression. Most of the metallic parts were painted in dark, oxidated tin color, although not yet in the greenish hues of old, oxidated bronze. The edge of the Power Scythe was highlighted with light blue/white to represent the force-field; perhaps I should redo it in green to stick to the whole corruption/disease theme. (Blue is always a color of purity; glowing green, however, is usually reserved for containers of super-diseases and biological weapons in popular lore.)

To be honest, the base caused the most problems; I just could not get the colors right. I tried different greys to depict the broken concrete, but it just did not look “real”. The breakthrough came when I realized that the “right” look can only be achieved using layers and layers of different grays and browns. I’ve kept drybrushing with different colors (metallic colors included at places), using different highlights, adding filters, washes and pigments; after about a month of working on it on and off, I decided it looked good enough to stop.

Well, here he is, striding into corruption, massacring loyalist forces with his arm-mounted flame-thrower/chemical weapon. (I think flames would be too “pure” for a Nurgle-champion; it must be some chemical contortion that melts metal as well as flesh. Whatever it is, it looks pretty cool, although I do suspect the short barrel causes some accidental drips onto his own armour now and then.)

Since the Horus Heresy book series started Forgeworld also started issuing miniatures of the most prominent characters. I don’t like all of them, but most are actually pretty awesome (and expensive). Like this guy: Kharn. (Who is a swell guy as we know.)

His character in itself -along his friend, Argel Tal- is one of my favourites. Kharn knowingly slides into corruption because of his loyalties. He is a noble warrior (as far as any Astrates can be noble; let’s face it, all of those guys are kind of dicks), who somehow retains fragments of his nobility even when he turns traitor. You can understand why he betrays the Imperium, and to be honest, he kind of has a point, too.
He is aware of the corruption as it happens to him, and this makes him cynical and disillusioned, as he knows he has no choice in the matter. All of his choices were taken away from him by the Emperor of Mankind (who is either incompetent or just plain stupid), and his damaged Primarch (who should have been put down as soon as he was discovered for the good of everyone, himself included).

Anyhow, since I liked the character I bought the figure. The pose is pretty dynamic (unfortunately Angron’s –another available figure from this series- pose is the mirror image of his), the quality is excellent, and you get a couple of options, too. (Helmet on/helmet off, and different weapons.) I’ve left out the second figure that came in this set. He had his helm caved in, his arm cut off, blood squirting; I felt this was an unnecessary addition. The leaping, axe-wielding Astrates would be perfectly enough to convey the berserker savagery of the World Eater; blood splatters and dead bodies flying around was not needed. (This is why I opted for the helmeted head –it’s scarier to see the contrast of an impassive mask, and the brutal, mad frenzy of Kharn.)

This is the first time I painted anything in white, which was not very easy, truth be told. The figure was first painted with grey primer, and then several light layers of white Citadel paint was added. I used very thin filters of dirt and grey colors to make the armor look used and dirty. Whenever the effects were overdone (several instances) I went back to correct them with white. This actually created a nice, layered look. I also tried to avoid “clean” colors –everything should look dirty, oily and damaged, as our friend probably does not spend as much time with patient armor maintenance as he should be. It’s probably not the “official” GW paint style, but to be honest I was quite satisfied with the results. (Except for the plasma gun. That gun will need some more work looking at the photos…)