This is part two of the MiniArt D7 review.

The suspension is a very complicated, very detailed assembly. Miniart has managed to even mould a set of springs… an actual plastic representation of springs, which look exactly like the real thing. They are very delicate, and easy to break (while you are trying to remove moulding seams), and also will be covered by the metal plates protecting the suspension, unfortunately. Nevertheless I have to say, it is an impressive feat of plastic moulding technology.

The assembly here -considering none of it will remain visible- seems overly detailed. The wheels and return rollers are composed of mulitple parts (step 51, 57 for example); I’m sure these could have been designed to consist of no more than two parts each. Most of the suspension elements could have been simplified as well, as they will be hidden once assembled. The only reason they are designed to resemble the real thing is that you might wish to depict the suspension during maintenance (I’ve seen a photo with the covers removed) or with damage. I was tempted to do a “cutaway” view on one side, but did not dare to endanger the review sample.

Once the suspension and the tracks installed, the final hydraulics pipes will need to be glued on. The over-engineering can be seen here as well: the pipes (H8, 9, 10, 11) could have been moulded together with parts H12, 13, Db16 to simplify things.

The dozer blade and its attachment unit is the very last step of the build. The blade itself and the frame looks gorgeous; you can see the subtle welding lines; the instructions, however, don’t show the alternative positioning optinos. It goes together reasonably well, however you will need to do some filling on the blade itself. Part Db4 will snap if you put it on  peg on Db9 in step 79, due to the smaller diameter of the hole on it; enlarge the hole slightly with a scalpel first. 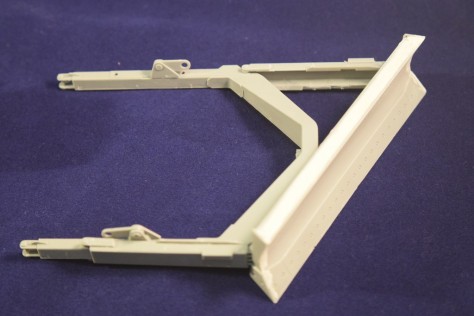 The model is slowly taking shape… time to paint. 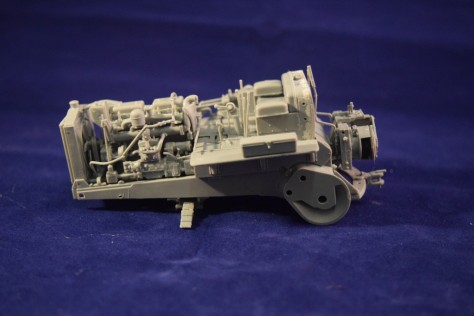 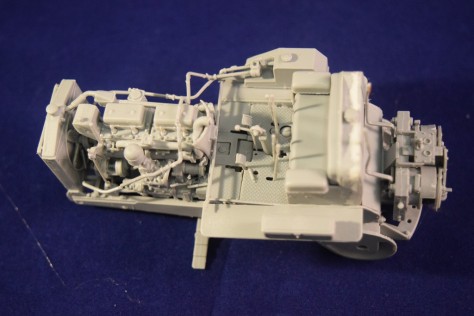 Fortunately most of the model is olive drab, engine included. This simplifies the painting process, as the model needs to be painted while being built. I’ve chosen to display it with moderate amount of weathering and rusting; while I really find the rusty-worn-torn look appealing, tanks and tractors did not really rust that bad on the field. (It’s a combination of short lifetime, maintenance, and protective paint.) Dozers and tractors are somewhat exception to the rule, as they were generally not in the line of fire, but I still did not want to overdo the effect. (After spending a month building it day and night I was afraid I mess it up with overzealous weathering. I’m a coward.) The other reason I’ve gone for the relatively clean look, despite of photos available of the dozer being absolutely caked with mud and dust was that this would have hidden most of the model. 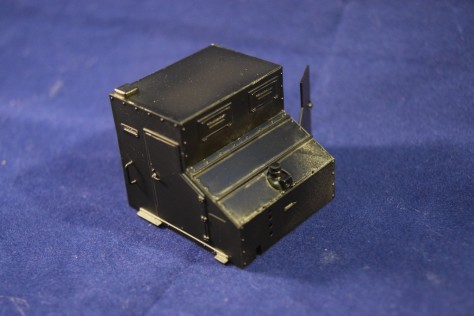 I’ve done most of the painting and weathering on the larger subassemblies: armored cab, engine and chassis, the suspension, tracks, and the dozer blade; this, of course means I only saw how the vehicle looks like at the very end of the building process. It was an incredible feeling -suddenly I had something to show for after all the work.

I’ve used Citadell’s Steel Legion Drab and Castellan Green to mix an olive drab color for the dozer. I always wanted to try the airbrush ready Citadell paints, and this looks as good time as any. Changing the ratio also allowed me to prepare lighter and darker colors. They are very thick, they did seem to be very good for airbrushing. I tried diluting them at first, because I could not see how this thick paint could get through the airbrush, they were perfect unthinned. 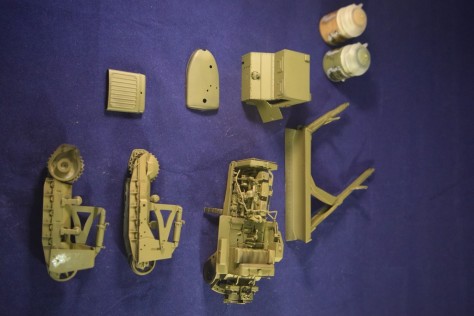 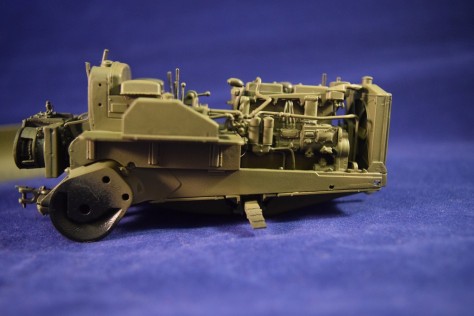 Well, the first paint layer was done. It’s getting near to the finish.