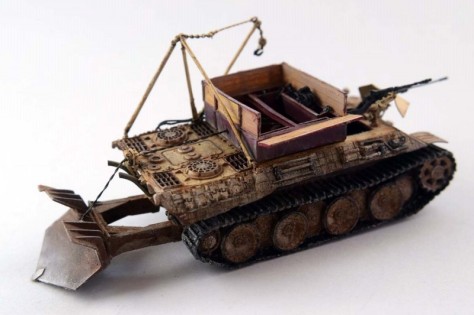 I’ve known about Milicast since, well, forever. (Or at least as far as 2005.) I remember finding their website, and looking at the wide selection of interesting models thinking I’d never be able to afford the prices and the shipping to the US.

Well, this has changed; I moved to the UK, and I do have a slightly better salary (which is balanced by living in London…). Anyhow, I’ve ordered the Bergepanther as something I always wanted to try from them. (They even have an M3 Lee with interior. In 1/76.)

I’ve written about the model and the issues I encountered during the assembly in my review on Armorama; if you’re interested, I’d refer you to there. Here let’s concentrate on the assembly and the photos… 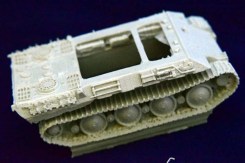 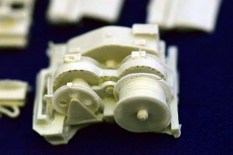 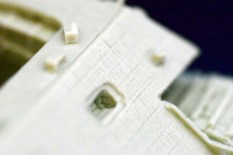 The complete hull is given as one, hollow part. It has all the running gear, tracks already attached; the middle is empty, where the interior (driver’s compartment, winch assembly) needs to be placed from under. There was a considerable gap left between the sides of the hull and the interior insert. Also, another issue was that the bottom of this part needed to be trimmed so that it did not stick out from under the vehicle.

The basic assembly is actually quite easy and fast. I went around the building and painting steps in an unorthodox sequence: first assembled, painted and weathered the hull, then added the interior.

Most of the winch assembly is a single piece, with some impressive detail; it’s a shame most of it is hidden once the tank is completed. 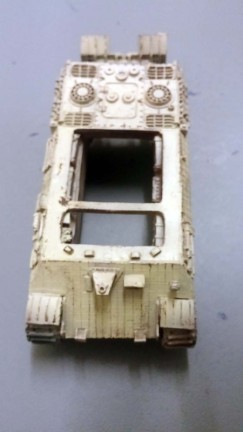 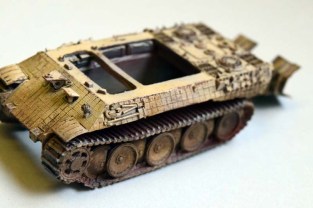 I added most of the larger details to the hull (with some of the more fragile ones left out), and did the painting and weathering. The tank was primed with red-oxide, sealed with dullcote, and applied a chipping medium by AK Interactive. I used Mig Ammo’s Dunkelgelb, and did a moderate amount of chipping using a stiff, wet brush. Since engineering vehicles undergo some serious strain, and they also tend to last longer than front line tanks, I was not worried about overdoing the effect. (This is a constant dilemma of mine; real tanks are not as rusty and worn as we depict them; absolute realism, however would make quite boring paintjobs.)

Once I was satisfied with the level of wear-and-tear, I sealed the paint, and followed with several brown filters. I also used Vallejo’s oil stain weathering product on the engine deck, and several light brown pigments on the sides and top to depict dust. The lower part of the hull and the running gear received a generous amount of mud (prepared from pigments mixed with turpentine) in several layers and colors; the last step was to rub some metallic pigments onto the tip of the dozer blade/spade. Since this is an engineering vehicle I wanted to make it properly dirty and oily. (The small scale makes it easy to overdo, though.)

Only after all the weathering was done did I glue the interior in, and chipped the bottom away a bit with a scalpel so that it did not stick out from under the tank. (It was quite thick, and could be easily seen if viewed from the front or back.) 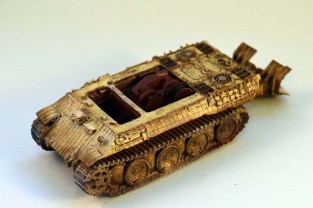 I think completing the hull before installing the interior and small, fragile parts worked out overall, but I did run into some difficulties of my own making. It was also a bit more tedious to add the exhaust ports after the dozer blade/spade was installed, for example, and I already mentioned the gap issues, so plan ahead with the build. It would probably be easier to glue the insert in, fill the gaps, paint, and then start weathering of the interior, followed by the painting and weathering of the hull. 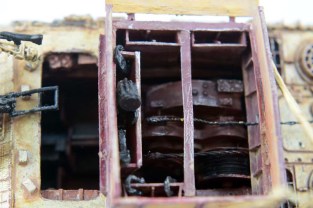 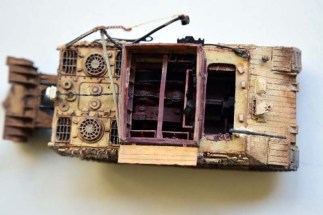 Once most everything was finished, I continued with the raised frame and wooden planks around the winch assembly. Since most of the engineering vehicles were converted from broken down Panthers, I used primer red on the metal parts- this particular Bergepanther was not given an overall paint coat after assembly. To decrease the stark contrast between the red of the metal and the rest of the tank I’ve used Tamiya’s Model Master set (the one that looks like a makeup set) to add different dust and sand colored pigments; this is a quick and easy way to do weathering. The wooden sidewalls were painted Tamiya deck tan, and I used burned umber oil washes to make it look like wood- the texture is really nicely done. There are wooden planks covering the interior provided as well. I did not use them, as I wanted to display the winch; you may cut it up into separate planks, and just scatter them around the vehicle. There is also an optional armor plate/raincover (?) for the crew compartment but I also left it off.

One word of warning: when installing the frame around the winch, make sure that the side with the hole is facing backwards; this is where the cable from the winch goes through.

I have done most of the detail painting and weathering steps at this stage, leaving the fragile parts off until the last moment. The MG-34, the 2cm autocannon and the crane was added on the very last step.

The crane went together easier than I expected. I was prepared to display it folded up, and call it a day, to be honest. I was pleasantly surprised how easy the assembly was. The only bit I’m not satisfied with -which is my fault- is the slight angle the top chain has in the middle -obviously it should be ramrod-straight. If there is a small weight on the hook, the tension straightens it out, so I might actually find something to hang on it to make it look a bit more realistic. I assembled the crane in situ (in place), but it might be a better way to assemble vertical parts (two rods and the connecting chain forming a triangle) separately, laying flat on a surface first. There is a similar problem with the section of chain with the hook at the end: the resin hook is not heavy enough to pull the chain down. (I have a Revell Famo engine in my spares box; I’m thinking about installing it to deal with both of these issues.) 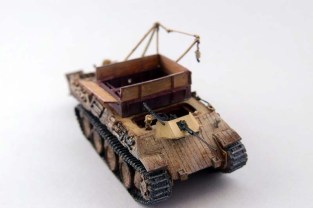 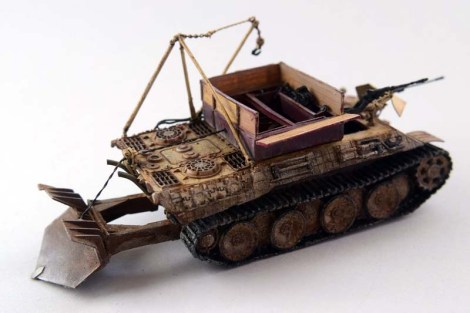 As the very last step I glued the wooden beam to the side of the tank (which I have forgotten about to be absolutely honest until I reviewed the photos).

Overall the kit was not as difficult to build as I thought it would be after looking at the instructions. It is a pretty good representation of the Bergepanther, and you can customize it to resemble several different variants easily. The scale is somewhat archaic (not many new 1/76 kits are being made as 1/72 has seem to have won the competition), and the model itself is quite old-school in its design, but this does not mean it’s not a good one. Anyone enjoying Braille scale resin kits will like this model.