One of the positive things of the game World of Tanks is that it introduced a lot of obscure vehicles to the wider audience. I’m not sure how many of us have heard of the Batignolles-Chatillion Char 25T aside from for French armor enthusiasts… and now at least 45 million people know of this vehicle. The fame did not come with scale models flooding the market (yet), so I was really happy to see that OKB issued this model in 1/72.

The Char 25T was developed by the Batignolles-Chatillon company (hence the name). Interestingly the company produced trains and locomotives; tanks were a new frontier for them. It was to be a main battle tank, designed around similar principles as the AMX-13: oscillating turret, a 90mm F-3 gun with a magazine/drum type autoloader, low silhouette, and sloped armor (80mm on the front). It featured a hydraulic suspension with six road wheels on each side. The tank was very small (5.67 meters long, 3.16 meters wide and, 2.37 tall), very light (25 tons), and not surprisingly it was highly mobile (65km/h top speed); also somewhat unsurprisingly armor was not exactly strong. It had a crew of four: a commander, a driver, a gunner and a radio operator. The design lost to the more conservative AMX-30, and hence never entered into production. Reliability issues, the oscillating turret, the autoloader (the tank needed to stop and the crew had to exit to reload the gun), and the lack of NBC (nuclear, biological, chemical) protection all played a part in the failure of the prototypes in the trials.

The only reason I know about this tank is World of Tanks; it is one of the best end-tier medium tanks in the game. (Well, was. It’s been nerfed not long ago.) It also looks quite unique, so obviously it was one of my first ever purchases from OKB. (Their models tend to be expensive, so it’s not something I do every day. Every purchase is being considered and mulled over for several weeks.)

The model is made up by over a hundred resin pieces and ten PE parts. The parts are very well detailed, the flash is minimal, and the fit is good (when I attached the side to the main hull I needed to use some filler in the front though, so it’s not perfect). The headlights come as transparent pieces, which is something I’ve never seen before in a resin model.

The tracks are given as sets of straight resin pieces, which need to be warmed up before shaped to the running gear. (I prefer to use hot –not too hot- water.) The hull and the turret come as one piece (each); most of the small parts make up the running gear. The photoetched fret is very thin and very delicate; it’s very easy to bend (even crumple) the parts; this is something to look out for. (It would be better if they were a bit sturdier) There is very little information available on this vehicle, so I cannot really comment on the accuracy of the kit; it measures up to the published measurements I could find quite well. 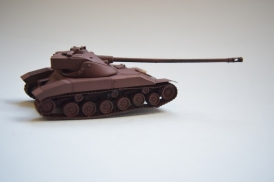 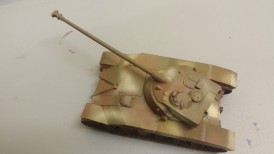 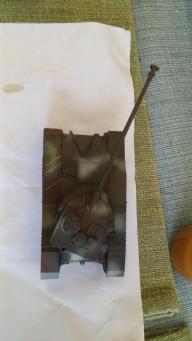 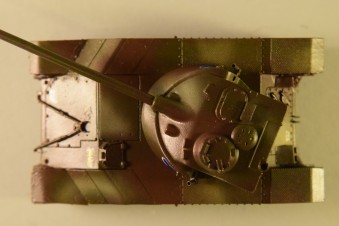 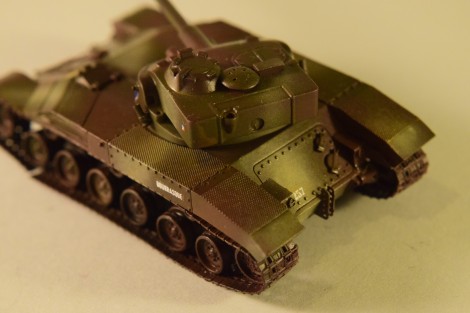 Normally with resin models the suspension is moulded as one part; in this case the elaborate suspension is made up by several small parts (most of the parts of the model are parts of the suspension). The assembly is not very difficult but a fine pair of tweezers is a must have. The fit is surprisingly good, but I ran into a small problem with the road wheels. Due to small misalignments in the suspension arms, the road wheels did not align perfectly; they were a bit wonky. I put the model in some warm (~50C) water and set them straight between two rulers; once the resin cooled the alignment was much better.

The tracks were also warmed up using warm water, and wrapped around the road wheels, drive wheel, return rollers and idler. Since one section will only cover about 2/3rd of the required length, two will need to be used per side.

Once the tracks were installed I glued the sides of the hull on. There was a small gap on one side which needed to be filled; nothing major there. The front part of the mudguards are PE parts which need to be gently bent. It would be nice to have a larger flap that goes under the hull to help gluing them in place.

The lights on the back and their PE covers were a bit difficult to install as the PE kept bending to the slightest touch. (The lights need to be pushed into the holes in the PE covers.) A couple of small PE parts (towing hooks, etc) were attached to the back of the hull and the resin gun lock to the front. (I managed to lose the top part of the gun lock, and somehow the headlights… We’re in the middle of moving right now, and parts do get misplaced, unfortunately.) The thinness of the PE is an issue, as it is very easy to bend or distort the pieces during handling.

The turret was pretty easy to finish: top of the fume extractor, the smoke grenade launchers, a rectangular piece of unknown function and the gun barrel had to be attached, and the tank was essentially done. The gun barrel is slightly crooked; I tried to straighten it using hot water, but gave up eventually; I did not want to make the issue worse. 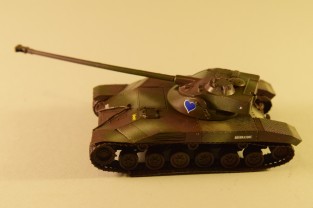 The painting and weathering did not take long- after all, it was an experimental tank. I chose a hypothetical camo using World of Tanks as an inspiration, and used an airbrush to apply it free-hand. I did a couple of light-brown filters to blend the colors together.

I covered the model with varnish, applied the leftover decals from Trumpeter’s B1 (the subject of the very first post of this blog). I’ve used these decals for other French tanks (ARL-44) before; my French markings are now officially depleted. Another varnish layer sealed the decals (this time I used Matte). Washes, some dust applied using pigments, and some mud (again with pigments); that’s pretty much it.

The model, overall, is quite easy to build, even for beginners. The running gear/suspension is a bit difficult to align, but there are ways to correct smaller problems. The price is a bit high, but there is no other alternative of you want to build a Batignolles-Chatillion Char 25T in any scale, so there you go.