Well, two Thousand Sons space marines, both post-Heresy. The first one is a Rubric marine belonging to Ashur-Kai (Talon of Horus, The Black Legion).

Pre-Herey colors with one pauldron painted black, indicating his aliance to the Black Legion. 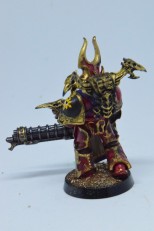 The other is just your run-of-the-mill Rubric Marine.

What can I say? I just like the way these guys look; even those ridiculous bolter-lance contraptions which make aiming utterly impossible. (They must be among the most impractical weapons of the grim future ever.) Aaron Dembski Bowden’s books bought the Custodes into life for me, so naturally I wanted to build one; not to mention I really wanted to have Kitten (or Corn Cob as the Emperor likes to call him) on my shelf. The problem is it’s not possible to buy one figure; and I did not want to buy a whole squad. The solution, after checking Ebay for a year, was to buy a whole set and sell the rest a bit cheaper.

Well, that’s about it. Due to the gold paint scheme painting was not very difficult; I quite enjoy using AK Interactive’s wax-based true metal paints. I dry-brushed the figure in several steps over a black primer base, applied to washes and highlights, and then finished with the small details.

Easy-peasy. I’m sure die-hard figure painters will take some serious issues with the model, but it’s mine, and I’m happy with it as an armor-model builder. I would like to hear your opinion, though. Shoot away the comments.