There was one post before about how I transported my models from the US to Hungary and then the UK (and then back to Hungary).

Here’s the second option: Christmas ornament boxes. I bought this in Florida, but I’m sure there are similar ones available online. It has three trays, and they can be adjusted to fit the models you want to protect. Some of the dividers can be cut to shape, so that they hold the models down when slotted in place. Throw in some packing peanuts and you are golden- all safe and protected.
(The box has been sitting in the attic for years, and only now had I had the time to get it. As soon as I have a little more time I will unpack the models, and feature them on the blog.)

A lot of the older builds featured on this blog were made in Florida; this is where I started seriously making models. (Well, not exactly, but close enough.) When I moved back to Europe, this left me with a singularly wexing problem: how on earth am I going to move my precious models back?

I would like to show you the solution I’ve came to. Since the models survived a Transatlantic trip in a shipping container, and have been kept for seven years like this, I think it’s safe to say that the method is sound.

I’ve recently decided to finish up all my started models that had been waiting for me for all these years in my mother’s attic, so I finally started to unpack everything. For the purposes of this post I’ve chose the Pnz I-Pnz II models I wanted to deal with first. (Both are Dragon offerings with full interiors, by the way.) As the final leg of their journey, they survived their trip to the UK like this. It’s also a cheap way to store the models if you don’t have a display cabinet, or don’t want to buy an expensive display case (which CAN be expensive in 1/35 size.)

After opening up the box, I “reverse-engineered” the steps; the photos were not taken during the packing, so they don’t depict step 3 very accurately. (Disclaimer.)

First step: get a plastic shoe box, and pre-cut foam, white glue. You’ll also need packing peanuts, or preferably, shredded paper designed for packing. (More on that later.) Shoe boxes are not an absolute requirement. I’ve chosen them because they were cheap and sturdy. If you want to send something by mail, for example, you can use a sturdy cardboard box just as easily. (As I have done sending a half-finished T-35 to the US. The poor guy had a long journey: it was produced in Ukraine, sold in the US, half-assembled by yours truly, sent back to Europe, I realized it was too big, and had no space for it, took it to the UK with me, sold it on Armorama, and sent it back to the US… It has not been China yet, but I’m hopeful.)

Second step: you cut and shape a “cradle” for your model. You cut a layer of foam as the bottom, and several others in similar size, so that they fit into the shoebox on top of each other. You should glue these into the box with white glue, but it’s not an absolute necessity. Place the first layer on the bottom of the box, and then build up the sides with the approximate sized hole cut in the middle, where your model will fit. It does not have to be perfectly snug; you can always put pieces of foam in to fix the model in place.

Third step: place the model in, pin it in place using small pieces of foam between the sides and the model. Use strips of foam across the top (fix the foam with glue -not to the model, but to the sides). This will hold the model in place securely. (Choose an area where you don’t have many small, breakable parts.) 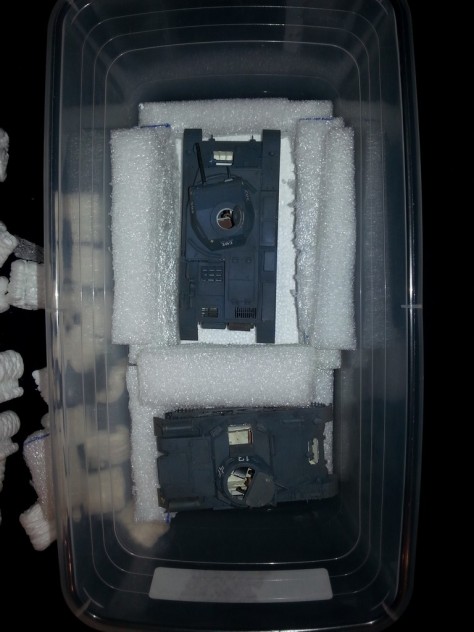 Fourth step: fill the box up with peanuts/paper strips. For long term I would suggest using paper for one reason: it seems like the Styrofoam peanuts have a tendency to stick to the surface of the model after a while (we’re talking about years here). So best be safe -and environmentally conscious. Tape the sides down securely. 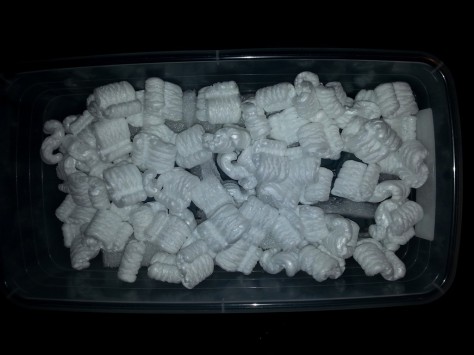 And that’s it. The model is relatively safe to transport. It can be dropped like this, it can be turned upside down, and it should suffer no damage.

Disclaimer: it needs more peanuts… you want the box full.