Well, I’ve been trying my hands on sculpting using several different mediums. The best so far were the oven bake clay products; here’s the first attempt on a serious subject: the Great One himself, Cthulhu. (If you haven’t yet read the Call of Cthulhu, please do. I’ll wait.)
Since then it turned out “Hello Cthulhu” is a thing; nevertheless I’m pretty pleased about how my cute Horror from the Deep turned out. It seems like you can cutify just about anything. 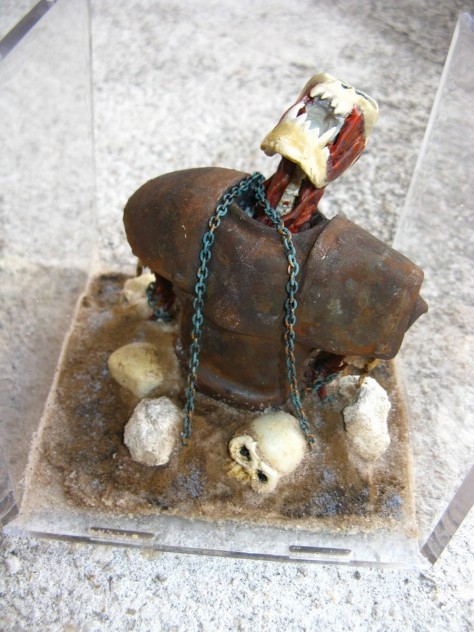 This one was one of my very first -and so far last- attempt of figure sculpting. I’ve seen what amazing things people could do using miliput and green stuff, so I thought I’d give it a try. Well, spoiler alert: it ain’t easy to make professional looking things out of these two-part, self-hardening clays. Or perhaps I don’t know the secret yet.

Anyway. Get on with the build.

I had no real concept in the beginning; I knew I did not want to do an actual person, as making faces is way out of my league.

I started with an armored torso. I was thinking more of a Roman style armor, but this is how it came out. The issue is the delicate details and the problems of making smooth, evenly curved surfaces out of the clay. I’ve tried using miliput to add intricate details, as I’ve seen on many message boards, but failed; eventually I settled on using tin foil to add some trimming and whatnot. All of which is lost under the paint. (Not that it’s a great problem; they did not look very good, anyway.) 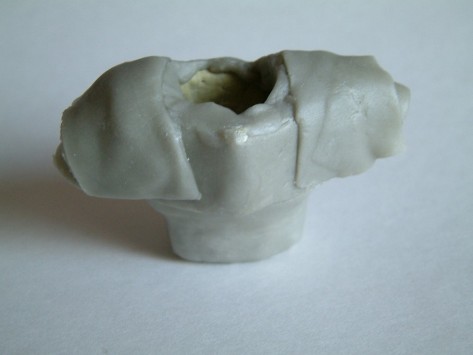 I was experimenting with the Great Cthulhu, but honestly, it just does not work.He is not the screaming type. He is the type that makes you scream. So the Great One is out.

Back to the basics, then: a skull. 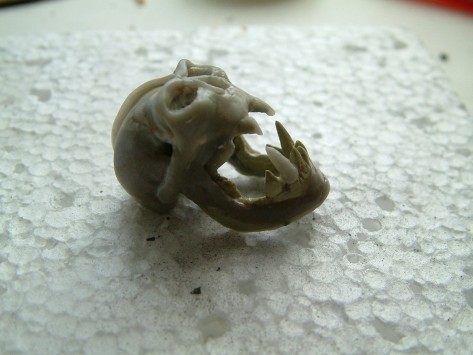 I realized very quickly that you cannot make it in one go -it had to be created over several steps, with a lot of waiting in between, while the clay set. So I first made the upper skull’s basic form. I used a Dremel tool to hollow out the eye sockets and the nose cavity. Onto the skull came the ridges around the eye, the nose cavity, added the teeth, then the jaw, which were later supplied with teeth, and finally, muscles. I did wanted to depict something with muscles still on -a living dead warrior, if you like. Since it was more simian looking than human, I’ve decided to make it into an orc.

Some larger muscles added. I tried to be anatomically sensible (I did learn anatomy, after all).

The pose was also an issue: I wanted something dramatic. The soundless scream at the sky does look somewhat dramatic I think. Along with the spinal column, some of the larger neck muscles were needed, to make sure our living dead orc can actually move his head. 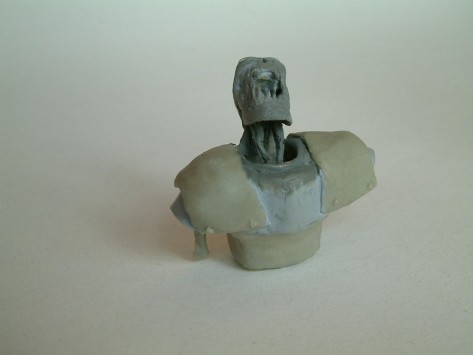 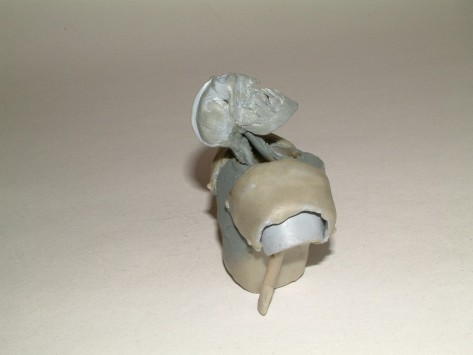 Primer applied… details corrected… primer applied again. This process is endless; you just decide after a while that you had enough. 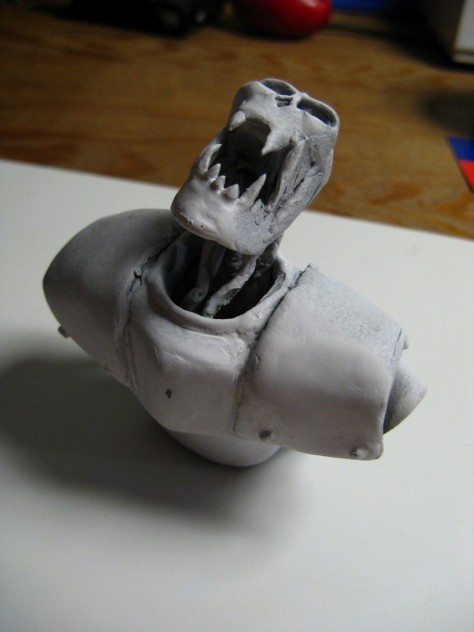 Since the armor is most obviously not smooth and even, it must be either leather (aged, wet and decayed), or rusted iron. I still can’t decide; they, however, look the same. I’ve used a pretty cool product to paint it: paint with suspended iron particles treated with an oxidizer.

I’ve added muscles to the hand-bones as well. Since you usually wear some sort of clothing under your armor, I’ve made some thin clay pieces, and attached them under the shoulder guards, representing the rotting, ragged undercloth. It’s actually quite fun making very thin clay pieces: using talcum powder, you can use a bottle or anything round to simply roll it out as thin as you can. The powder will make sure it will not stick to anything while you are pressing and rolling. (Pro tip. The only one I can give you. The rest is amateurish improvisation… 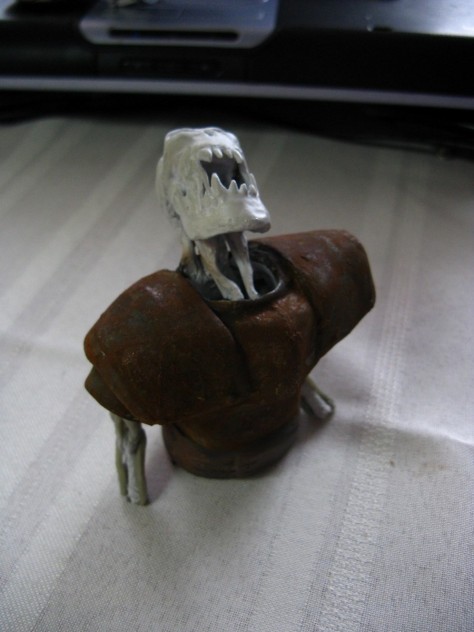 The painting process on the muscles and bones. The muscles needed to be raw red color; like the color of a raw steak. The bone was to be ivory colored; after all, only very dry, very bleached bone turns white.

The muscles were first painted in deep red, and then some burnt umber oil paint was very thinly smeared on them; the oil paint is translucent, so it acted as a filter. Once dry, I used some black washes lightly to bring out the fibers I’ve scratched into the clay while it was still pliable. 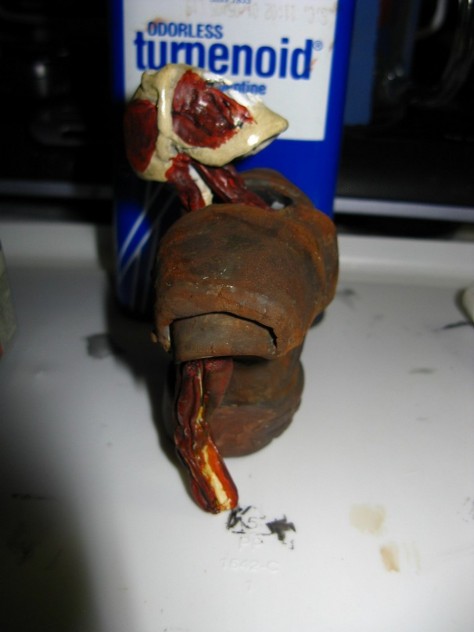 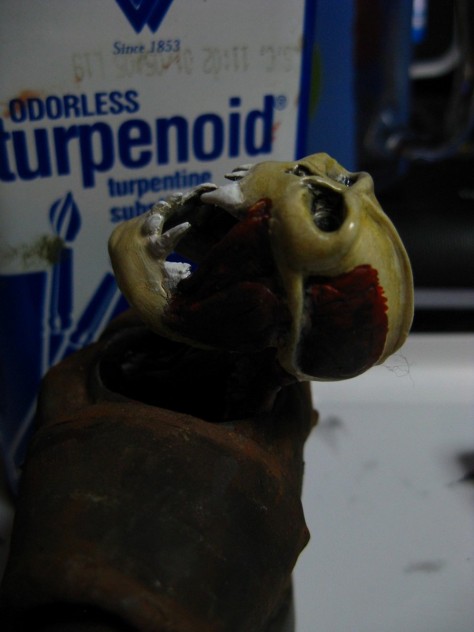 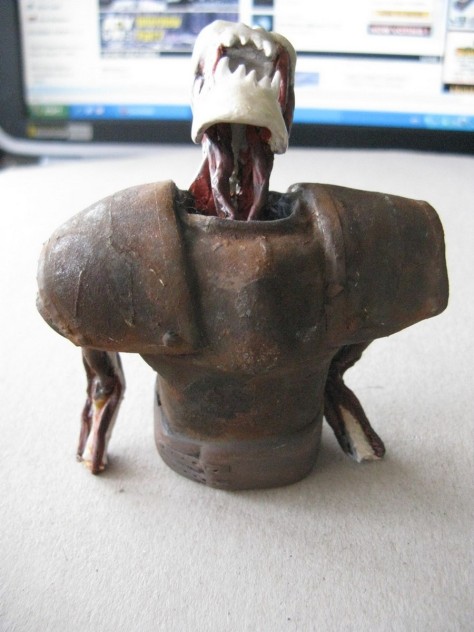 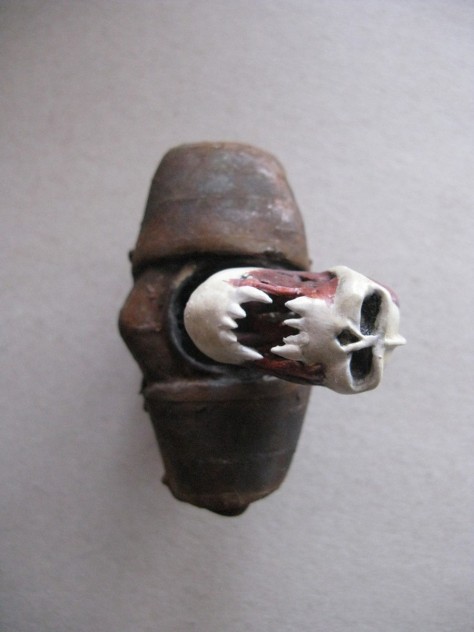 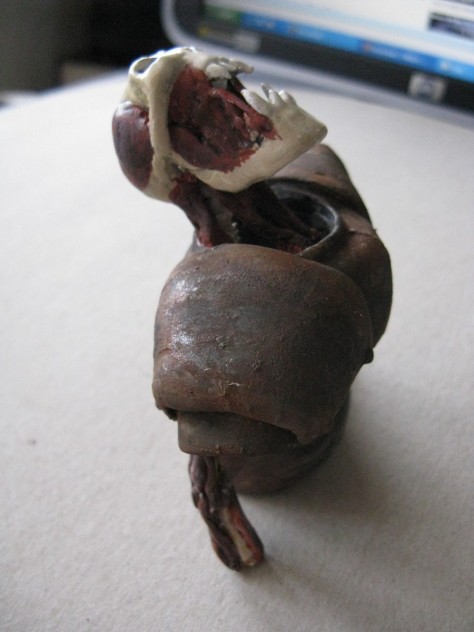 The bone parts received several layers of yellow and ochre colored washes; they did turn out looking like fresh bone. The teeth were painted white.

I’ve made several smaller skulls (more human-proportioned ones, too), and mounted our struggling orc warrior waist deep in a mound made of earth, corral rock, and skulls. I’ve used a baseball-display case to put the whole thing into. I’ve treated a copper chain with oxidizer, to make it look ancient, and here you are: a noble orc warrior condemned to suffer chained down, buried, his spirit unable to leave his body after death. I don’t know his story, but I’m fairly certain he’ll break free and wreak terrible vengeance on those responsible for his suffering. (I wanted to make him into someone you can actually feel for. To be honest, I think Tolkien was horribly unfair to orcs.) 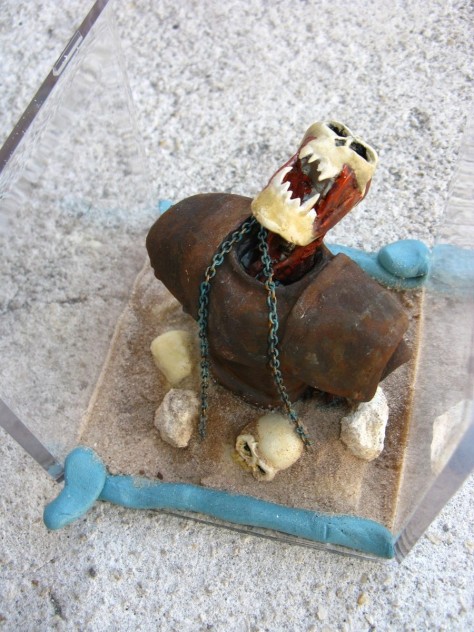 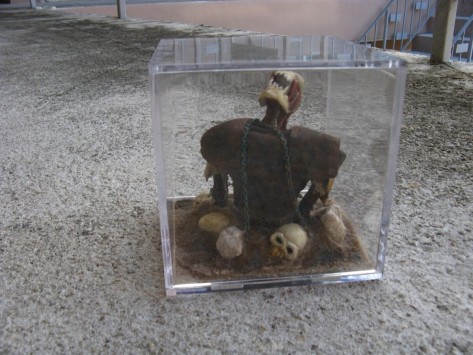 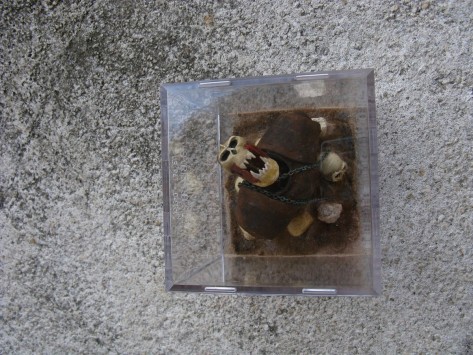 The conclusion? I do like the result; it was not exactly planned, but nevertheless it does look as if I knew what I was doing. (I assure you it was not the case.)

However, it did make me appreciate the difficulties of sculpting. When you see what people are able to do with green stuff, milliput or any other sculpting clay, it looks magical, and moreover, it looks simple; after all, the clay is easily formed, so you should be able to make it look like anything you want, right?

Wrong. First of all, the clay is somewhat rigid; I expected them to be more pliable. Making delicate details is not impossible (after all, people do make amazing things), but it’s not as easy as it looks.

Second, it sticks to everything; you put a small detail onto the piece, you try to push it down with a tool or a toothpick, and it comes up. Wetting your tools helps somewhat (wetting with water, that is; don’t think I don’t know what you were thinking about), but then, if the water gets onto the surface of the piece, nothing will stick to it, either.

Patience is the key here: you add one detail, you wait for a day until it cures. Then you add another. And another. Also: don’t be as arrogant as I was, and find tutorials how to do this; after all, people are making incredibly detailed statues, busts and anything you can think of, while all I was able to do is an -admittedly cool looking- creature which does not exist, so nobody can point out the inaccuracies and clumsy execution. If I tried to make a bust of Angelina Jolie, the results would be less appealing to the eyes, I promise you. (Although it might have looked something similar; perhaps this is the way to go to make novel creatures nobody has ever seen before; to break the mould so to speak. Instead of using one’s imagination, just depend on one’s incompetence.)