Since I started both Panthers (RFM and Takom), I will add some observations to help with the comparison of the two kits.

These are pretty straightforward bits; nothing major. The detail is nothing sort of amazing.

The central rod which holds the controls (handles and pedals) is somewhat awkward to assemble, since the central rod is made up by tiny sections. Due to the small sections it is kind of difficult to make a straight rod. Not to mention the narrowness of the hull makes it difficult to keep it straight. (It bent further when I dry-fitted -or rather, attempted to- the transmission into the hull. Tried to straighten it out but I was worried it would break.)

Issues with the hull

Well, there is one issue, which kind of causes a whole subset of issues. The hull is too narrow. Simple as that. This causes the torsion bars to not to fit properly (as mentioned in part 2 of the build), and it means the PE brackets on the floor of the hull will also not fit.

The torsion bar issue could be solved with a simple sanding. Tedious, and a bit annoying, but doable.

The hull brackets, on the other hand, are a whole different matter. 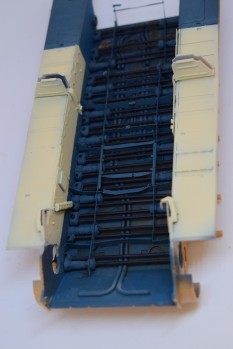 The PE is thin, and bends easily -it also warps easily. And this is not a good thing when you are trying to install a delicate, multipart PE bracket system into a too-narrow hull. I did my best, but the results are far from perfect. At places the cross-brackets had to be trimmed to fit them into the hull, which threw some of the alignment of the longitudinal brackets off a bit. This caused further cascades of misalignment. The model has been engineered to such a tight fit, even the smallest deviations will make it difficult to install further parts (such as seats, the cabin floor, ammo holding bins). See the above photo: the seat of the driver sits on molded-on bars which had to be trimmed so that the platform fit into its place due to a tiny bit of deviation of the placement of the underlying PE brackets. At this point I was seriously feeling the model was actively trying to fight me.

Filling up the hull…

Where to start? This is where the lower hull starts to look kind of complete. 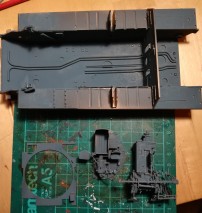 The tight fit caused further headache. The instructions would have you install the ready-bins first, and then add the sqare-shaped floor panel which holds the rotating turret floor. Take a good, long look at the panel itself: it has all the space for the read-bins pre-cut; mostly just on the sides, but one is completely enveloped by the floor panel.

The fit, as I said, is extremely tight; test-fitting the bins on their own showed how difficult it was just to push them into place. (Perhaps some sort of a lubricant would make it easier…) However, when these bins are attached to the bottom of the hull (and PE brackets), it means you have to push several of them through the panel at the same time, while the panel itself is a tad too wide to fit inside the hull comfortably, so you have to keep pressing. It is not the case of “just drop it straight down”. Without some serious pushing you cannot install the the panel in its place even when the hull was bare without anything installed yet. The fact that there are things in the way complicates matters tremendously.  You have to install the floor “sliding” (=pressing hard) through five bins, and the side of the tank -plus the firewall. Oh, and the bins are a tiny bit misaligned as the PE brackets made it difficult to attach them exactly to where they were supposed to go.

I ended up removing the bins, installing them into the floor panel, and cutting off the pegs that supposed to attach them to the bottom of the hull. After this I pressed the panel down in its place while trying to pry the walls of the hull apart to create more space for it, and once this was done I tried to force everything in its place. Needless to say this sort of manhandling is not exactly what you want to do to a delicate model… I did manage to damage the paint on the side of the tank.

And there it is. This was finished in August, but I did not have the strength to touch the tank again. Will have to plow on soon, I guess. Not looking forward to painting the ammunition for this and the Takom kit…