This does sound like the start of a bad joke.

It isn’t. It really is about electronics and the giant squid that will hold the whole thing in place.

Anyhow. I finished the interior in the first part, and after a long period of trepidation I did bring out my soldering iron (I bought it two months ago), and using lead free solder, I managed to bang together a few LEDs, a switch and a 9V battery.

I had a bunch of LEDs waiting; I bought a home-made lighting kit for the model, which provided some rudimentary instructions and some good pointers about how to install LEDs into a plastic model, and I also bought a bunch of cheap LEDs on Aliexpress with the resistors already installed.

The top part of the ship had to be cut off to give better access to the bridge (I marked the area with a green marker). The extra PE set provides a bridge, so I wanted to show it off as best as I could. (Not much can be seen through the ports, but at least it’s there. It is smaller the space available in the model, so the installation was not perfect, but again: not much will be seen of it, anyhow. And it will glow green.) 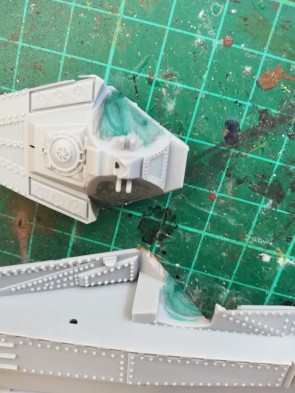 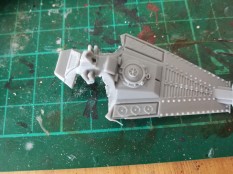 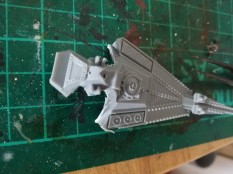 The whole exercise was less painful than I expected; it is not pretty, but it works. (See photos.)

I essentially put all the LEDs going into the body of the model into a parallel circuit, and just put the green LED that goes into the base of the squid in line next to the switch. I do hope all the wires will fit into the hull… I drilled the appropriate holes, and fixed the base of the wires with a glue gun onto the bottom plate of the hull. I ended up only using the LED from the lighting kit for the headlight; the rest were too bright for my taste. (The others are too dim, and quite large, too, but this is a compromise I am willing to accept.)

I used the masks on the observation windows, and found them somewhat lacking… some of them are a tad too big, and some of them are inaccurate in shape. It is the most obvious in the case of the central circular section: as you can see it should be made up by triangular shapes. The problem is that the masks provided are equilateral triangles, and as you can see their sides should be longer than the bases to create something that resembles a framed observsation port, rather than a cut-up pizza with the slices slightly pulled out. I ended up removing these masks, and using masking fluid slightly diluted with water. (The masks on the sides of the central part were somewhat oversized, so I ended up removing them as well.)

Well, at least we got some masks, so there’s that. Some of it was actually quite useful, too. 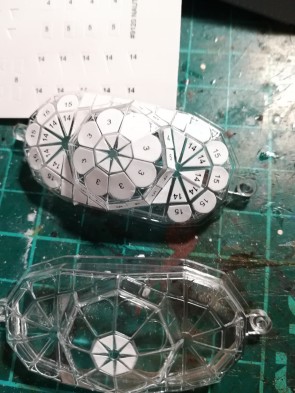 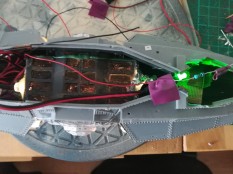 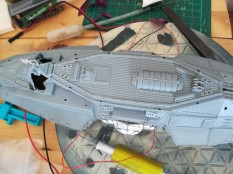 I also started working on the squid. The arms were relatively easy to determine how to assemble (the slots are tailored for individual tentacles, but it did take some time to work out which one goes where), and I drilled a hole in the base for the green LED. 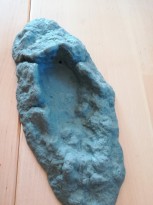 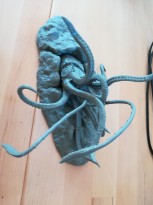 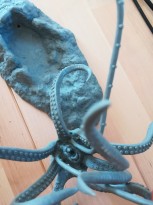 I will install the LED once I painted the base.

One thought on “Pegasus Models 1/144 Nautilus part 2. Electronics and the squid”