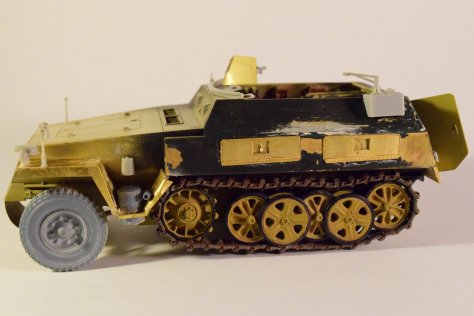 This is a very, very old build that has been sitting in a box for a long, long time. I feature this model because it represents my limits; not necessarily limits of ability (although those, too), but the limits of what I’m willing to do for a build. The base kit may not be a difficult one, but this is an all-out aftermarket bonanza. Over the years I reflected on this build a lot, and it helped me understand better of what the hobby means to me. I realized I like challenges, but only within a certain limit; as soon as a build becomes work I do not enjoy it any more. This model with all the aftermarket essentially became a job; you are spending an hour or so just to put together the convoy light from individual PE pieces -and the fruit of your effort does not actually look better than the plastic original (if there’s a visible difference at all). Or worse yet, due to the high level of skill needed for assembly, it actually looks worse. So yeah. From now on only builds that are not evolving (or devolving) into a full-time job. (Unless someone is paying for it of course.) So the work has been ongoing for at least a decade now: I continued my predecessor’s efforts, then gave up; I shipped the model to Hungary when I moved to the UK, and there it sat in my mother’s attic until I dug it out to finally finish it two years ago. Here in the UK I’ve finished several 1000+ part models while it was waiting patiently for me to work on it which I did on and off. But mostly off. And now it’s finally close to finishing.

So without further ado, the model.

I bought it on Ebay already started; someone went all-out with the DML 250, and bought all the Royal Models aftermarket sets he could get his hands on- and then sold it for peanuts. It was an ambitious project; a project with appealed to my naive younger self. Trying to build several sets does feel like biting a bit too much: you not only have to coordinate the kits instructions with one aftermarket set, but coordinate it with several sets, with a lot of overlap and variation. Some sets fit a different version of the vehicle, and all three have parts which are duplicated/triplicated; making sense of four sets of instructions is not an easy feat. The fact that Royal Models are not always clear on their instructions do not help matters either.

My main issue -aside from the conundrum presented by the several sets of instructions- was the tiny PE parts plaguing the whole build. I started the interior in 2007 back in the US, then shelved the model because I got a bit overwhelmed by the sheer amount of PE. I still do not know how possibly I could hold a 1mm PE part, and apply it to wherever it should be going without gluing my tweezers together and onto the model. 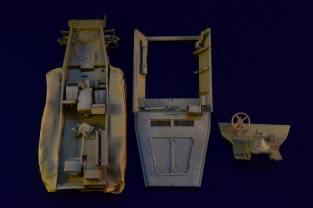 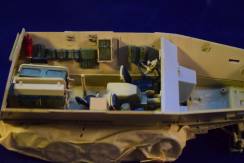 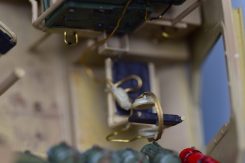 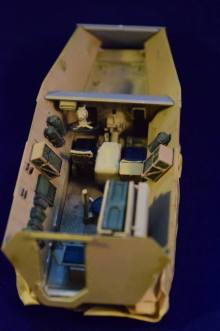 The finishing touches did not go well; not at all. I finished the interior a year ago, and the model went back to the box as I found it difficult to add the PE tool boxes on the sides. A year ago I weathered the interior a bit: added streaks, chips and dirt, finished with the small details, and closed the hull. I realized really quickly that the kit parts are not always inferior to the aftermarket alternative: the radio rack (but not the radios), some of the smaller equipment was kept from the DML set. In retrospect I wish I kept the tool boxes and the fenders, too…

The kit tracks were surprisingly good -they are workable plastic tracks. I have to say this may be an older DML model, but it’s still pretty good when it comes to detail.

Once the hull was closed off, I turned to the toolboxes on the side. I managed to attach them after a brief struggle, but there are some issues with the angles. I suspect some of it is my own incompetence, but some is due to the fact that the Royal models set was designed for the Tamiya model, and it’s the DML version I’m using. Regardless I went through several iterations of filling, sanding and painting; I used both Green Stuff and ordinary putty to do the job, and used the primer to check for irregularities. 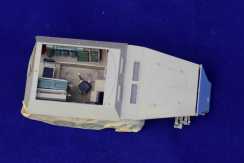 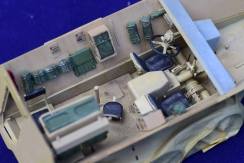 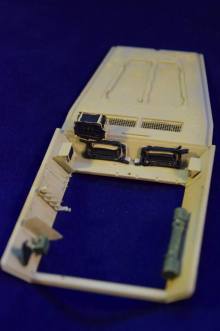 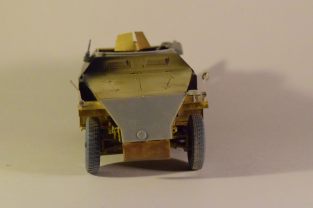 Despite of having done the most annoying/disheartening part – filling and sanding- I ran out of steam again. I was only recently spurred on by my feelings of guilt. I have decided not to start new models until I finish off these shelf-queens; so far I’m making good progress. (There’s an Airfix Bentley and a DML 251 to be finished; not to mention several WWII and Warhammer figures.) And here I ran into one of the problems with the instructions: the doors for the tool boxes were to be installed from the inside. Which were not exactly indicated by the instructions: it shows the doors going on from the outside. The problem is I’ve already attached the frame to the hull, so outside the doors went.

I did try to install most of the minuscule little padlocks and all but at the end of the day I did what I could without driving myself crazy. For me a victory will be achieved if I finally can mount this model in its case. Ironically the plastic original has very nice padlocks moulded on them.

The Royal Model set is extremely comprehensive and detailed; the problem is it’s not very user friendly. I especially disliked the fact that the front mudguards are to be built from three different parts instead of folding one into shape; I’m not even lamenting on the fact that you’re supposed to glue the edges together without a small PE flap provided that could have been used for more secure attachment. (OK, I am. I AM lamenting.)

Another few months of rest; and then a new effort to finish this build. I’m quite motivated to finish off everything as I may be moving to a different country; I want to take these models with me mounted in their cases, instead of languishing in a box, half-assembled.

I sorted through the kit parts that I wanted to keep, and installed every single little detail I’ve left out so far. I also decided to stick to the kit’s plastic option whenever I can; particularly when it comes to the antenna mount for the large radio. I did not feel like folding and gluing the elaborate little assembly made out of several tiny PE parts, so I just slapped the three-part plastic one on. It does not look as nice, but at this point I was just happy to call the building phase finished. I also decided to use the kit’s width indicator rod instead of trying to fashion one out of wire as the instructions suggest; I also used the kit lamps and tools. The truism -just because it’s there you don’t need to use it- never rang truer to me than in this kit. I still am left with a ton of PE I have absolutely no idea where they should be going.

Anyhow. I’m done with the building, and this is what matters. Next step: painting the blasted thing.