The first part of the review

The engine deck consists of several subassemblies that form a somewhat complex set of hatches. The cooling flaps can be positioned open or closed, and they are protected by a very set of nice PE grilles.

I did not even bother to try to clean up the thin plastic rods (c1, c2) required for the engine deck; I simply used them as a template to fashion replacements from wire.

Smoke canisters are installed similarly to how the real thing was: the PE straps hold the tiny plastic rods that are fixing them to the back of the hull, along with the mechanism that allows to them to be released. The assembly is finicky, but pretty impressive.

The unditching log looks pretty convincing; normally I switch them for an actual wooden stick, but in this case I kept it. Primed it black, and then spent some time drybrushing Tamiya Tan on top. The whole thing was then painted with Agrax Earthsade by Citadel.

As mentioned the external fuel tanks are provided as two halves. They are typical WWII type ones, although they are somewhat narrower than the ones used on wartime tanks. They are held down by PE strips – when building make sure you do the fuel tanks first, and add the storage boxes after, because in several cases they obstruct the tie-down points for the straps. Another important piece of advice: do not install the fuel tank on the left back mudguard. The flap (C9) protecting the exhaust port should be fitted first. (In my case the fuel tank was placed too forward, which interfered with the correct placement of the flap… Annoying.)

The towing lines were provided as plastic parts; MiniArt is being very optimistic about the chances of being able to bend and fit them into their places. Better get some picture hanging wire, and use the plastic eyes of the cables only. Make sure you cut a wire half a centimeter longer than the plastic part; it’s too short otherwise.

The AA machine gun is a complex multimedia assembly of plastic and PE parts; normally I buy aftermarket barrels (or even resin guns) to replace this part, but in this case it’s perfectly suitable. 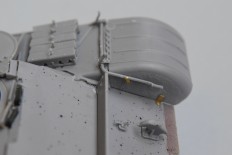 The turret interior is pretty busy; it’s actually not as tall as the T-44 turret, and have a lot of things crammed into it. The turret originally was cast as a two-part hemispherical shape with welded roof consisting of two rolled armor plates 30 mm thick. The model’s turret is designed the same way: it’s built up from two parts (top and bottom), and the roof plates are added separately. The roof plates are considerably thinner than the sides; I suspect they are all scale thickness.

The 10RT radio and the TPU-4-bis-O-26 telecom systems are placed on the commander’s side, and there is a ready rack on the back of the turret.

The gun is a very delicate assembly, so once it’s finished care needs to be taken not to break the thin plastic parts off.The gun breech has a seam in the middle, which needs to be filled in; to be honest it will be very difficult to see in the model. The gunner’s sight and the coaxial machine guns are complex little models of their own; once they are glued on, they tend to break off easily… (An important point for further handling.)

I have primed the interior using a primer red color, sealed it with varnish, and used the hairspray chipping method on the top color (blue grey on the bottom of the hull and white everywhere else). To make the vehicle look used, and to decrease the contrast of the pure white with the chips, I mixed up a burnt umber filter, and applied it unevenly to create patches of darker and lighter discolorations, and some dark, almost black brown washes to bring out the finer details. Finally I used different shades of rust brown oil paints to create some discreet streaks. Some rust and dust colored pigments were used to add a little more depth to the weathering, and I used a silver pencil on the edges to make them look metallic.

The gun got a similar treatment, only the cover color was green, rather than white, and for obvious reasons I did not add any streaks to it. 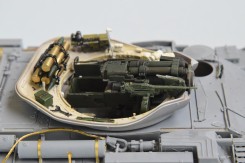 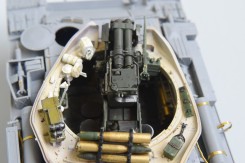 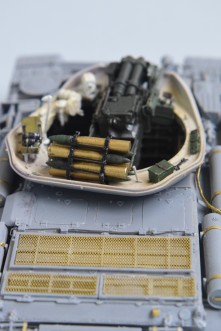