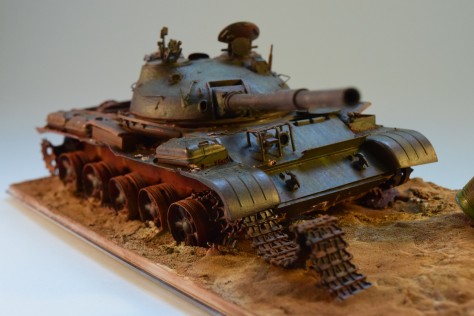 The first part of this build can be found here.

With the major building and painting finished, it was time to put the tank into context. Well, into a scene, that is.

I buy large plastic cases to keep my models in; they are excellent for display, protection against dust and curious fingers, and also make it easy to transport the models. In some cases I use them as small dioramas.

In the second part the tank was reasonably finished, but it was still somewhat uniform, despite of the layers upon layers of paints, paintchips, oil paints, filters and pigments. Now was time to bring out the sponge…

The technique is reasonably simple: dab the sponge (or the scrotch brite) into the paint, dab most of it off on a piece of paper, and then keep dabbing it against the surface you wish to cover with paint/paintchips. (Depending on the amount you cover you can depict paint chips or flaking off paint.)

I’ve used the external fuel tanks to experiment; unfortunately the box was not long enough for these to be mounted onto the tank…

First, I’ve used the sponge technique to make the uniform brown surface into a rusting, multicolored one.

Second step: using light green I repeated the process. (This color is excellent for paint chips, too.) It’s not a problem if it’s too light at this stage; in fact, it’s actually necessary- the subsequent washes, filters will darken the color anyway.

And finally, the result: I’ve used overall brown washes, which created a grimy, used look. Some more green was dabbed onto the barrels in a much smaller area, and voila – we have an interesting, rusting surface with different shades and colors.

The tank was glued onto the base using two part epoxy (it’s quite heavy because of all the resin and metal), and then I used Tamiya’s soil Diorama Texture Paint. (I’ve got it discounted when the largest hobby store chain in the UK went bust a couple of years ago.) The color is not exactly great, but we’ll help it a bit later using the airbrush. 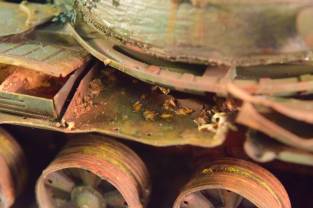 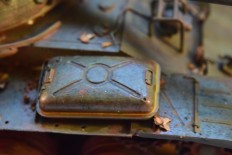 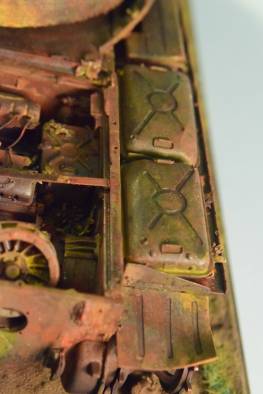 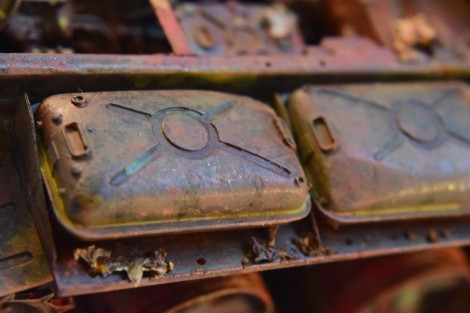 Using the sponge method I’ve added green patches onto the turret and the front part of the tank- I wanted to achieve a color difference between the front and the back.

The paint was toned down with some brown filters.

I’ve used the leftover tracklinks from the MiniArt T-54-1 for the tracks; a lot of them don’t have teeth, since they are the special links for the ice-cleats, and they are also narrower than should be, but to be honest I did not want to spend money on extra tracks. Nobody will notice, unless they read the text. 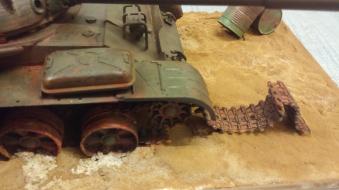 I’ve bought some AK Interactive products online cheap (six bottles for twenty quids) – rust, different colored streaking products, washes, and one that simulates algae streaking… so I used this tank to try them all.

I’ve used more rust pigments on the turret and the side of the hull, and used a dark brown filter to tone down the contrast a bit. Black pigment was used sparingly to depict soot (my fiancee’s insistence)  The way I use these pigments is to load a brush with Tamiya’s flat varnish, dab it into the pigments, dab most of it onto a piece of paper, and then dab it onto the surface of the model. You want to have some in the brush, but not too much; kind of like a heavy drybrush.

I’ve used some wine by Eduard to depict a creeper growing out of the driver’s compartment. The fallen leaves were made using the actual seed pod of a tree. Unfortunately I can’t figure out what it’s called; it looks like a fat caterpillar, and when you grind it up between your fingers, it falls apart into Marple-leaves like parts, and seeds. I mixed some white glue and water, added this plant material, and distributed onto the tank.