The Zrinyi II has always captivated me. Being a Hungarian obviously Hungarian-made armor had an interest, but this SPG in particular caught my eye due to how it looks. It simply looks cool, and unlike the Toldi, it was an effective vehicle as well.

Let’s face it, Hungarian armor was never a very famous (or even known), there were almost no models available for the longest time. There was one series of tanks done in resin in 1/35 for a horrendous price, and Hunor has a 1/72 line of Hungarian tanks (some of which I featured on this blog) of which I did not know about for a long time.

And then there was this beast: a 1/15 scale resin model of the Zrinyi II. I saw it in the since-defunct Sas Militaria, Budapest, and it was offered to me for the paltry price of 300 dollars. Needless to say I was resigned I’ll never have any Hungarian tanks -let alone a Zrinyi- in my collection, ever.

In the last couple of years, however, suddenly these vehicles started to appear in plastic both in 1/72 and in 1/35. I built the Hobby Boss Toldi, and I also could not resist to buy Bronco’s 1/35 offering of the Zrinyi II. (To be honest I should have stick with the 1/72 Hunor one.)

This was my very first Bronco model. The detail was very nice, the plastic was great quality, the fit was good, and yet I did not enjoy the process at all. The instructions were not always clear, and the model is overcomplicated. With the overly complex MiniArt kits, like the D7 dozer, you have the feeling that the engineers wanted to put everything into the model; complexity had a purpose there. With this model I felt like they were trying to mess with me. (The running gear was especially annoying to assemble, not to mention the installation of the mudguards.) Talking about the mudguards: they are very thin, very nice pieces of plastic; there is no need for any PE replacement.

We do get some interior detail, but not enough to leave the hatches open; most of the model is empty. (This is not a criticism; I’m not sure people even know how the Zrinyi II looked like from the inside.)

The tracks went together perfectly fine, unlike the Hobby Boss Toldi which I was assembling at the same time. As a first step I assembled two links at a time, and then joined these sections into larger ones; while the glue was still setting I could form the finished tracks around the return rollers and the drive wheel/idler. 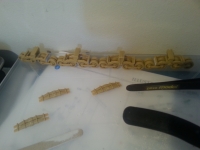 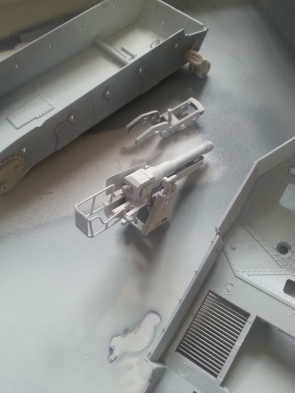 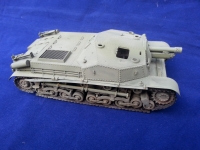 Due to the fact I had to move cities several times during the build perhaps it’s not surprising I lost a small fret- unfortunately my Zrinyi does not have any periscopes.

The side skirts are very well detailed; it’s a shame they are provided as one unit per side. (It would be nice to be able to mount the different sections separately as the real things were. I was not brave enough to attempt cutting them apart.)

The marking was to be done using a provided PE mask; it was a really nice touch. The large cross sign on the engine deck is provided as a decal, but I would strongly suggest to try to paint it as well. The decal is enormous, and goes over the engine compartment’s hatches. Needless to say it does not conform well to the difficult surface even with the use of copious decal setting solution. 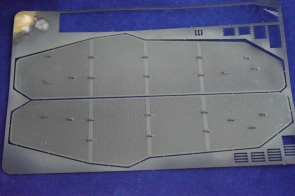 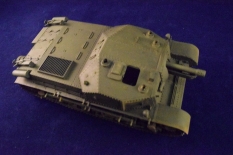 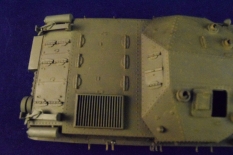 The painting and weathering was somewhat of an arduous process as I was experimenting with several products and techniques which necessitated a couple sessions of repainting.

The base color was a relatively dark, flat green; this was shaded using darker version of the same color, and then modulated using filters. I’ve used very thinly diluted oils as overall filters, and the dot method on larger surfaces.

I’ve tried to use True Earth‘s products for shading and fading with a varying degree of success; these products are not as easy and straightforward to use as the manual claims it. For one, absolute, flat surface is a must; and application by airbrush is also something that gives a better result. Don’t get me wrong: these products look like they have enormous potential; however you need to experiment to achieve a result that looks anything like the cover photo.

The wooden handles of the tools and the blocks for the jacks were painted Tamiya Tan, and then I applied some umber oil paint undiluted. By scraping most of it off using a very stiff brush you can get a nice-looking wooden surface relatively fast.

I’ve used pigments mixed with water on the lower part of the chassis; once they dried, I simply brushed off the excess. I repeated the process with much less and much lighter colored pigments on the top surfaces as well to simulate dust. With a fine brush and a dark brown color I painted some chips onto the tank, and used rust colored oil colors to simulate running rust from these spots. The exhaust received several layers of rust color pigments; I also rubbed some off between applications to make the effect realistic. (This “adding and removing” method is quite useful in weathering.) As a last step I used a silver pencil on the edges of the tank, the running gear and on the tracks to simulate the metallic shine of worn metal. 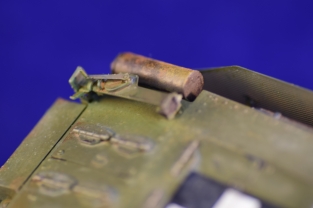 Well, the tank itself is ready. Next stop: a diorama setting.