I bought this model in Florida, back in 2007, and after doing a minimum amount of work on it, I just boxed it up. It stayed in a box for a long time along with a Tamiya T-62 -soon to be featured-, and a DML Sd.Kfz.250 -similarly soon to be featured.)

Anyhow, it came with me through my years doing my PhD, but I never got to work on it. I had no airbrush, no space, so I focused on 1/72.

I finished the beast.

(Another confession… I just realized that there were not two, but three Marder III variants. I was under the impression this kit was a Marder III (Sd.Kfz. 139) -it goes to show how long ago I saw the instruction manual-, and I am still planning to build a Marder III Ausf M. Well, apparently, this is the third one of the two I wanted to build…)

Anyhow, since it’s a DML kit, it went together well; I experienced no problems with the build, aside the poor fit of the gun shield into its place on the upper hull. The detail is great, and the kit came with PE and metal gun barrel- things that made me love DML in the first place.

I got most of the sub-assemblies ready, painted and muddied up the sides of the hull so I could install the running gear and tracks, and proceeded with the painting of the rest of the vehicle. 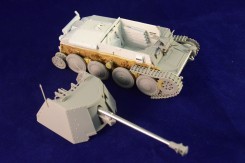 I wanted to try the new (well, for me at least) Mig Ammo paints, so I got the Dunkelgelb and Olivegrun from them. I did not look up how to use them, so I did experience some problems with the paints. Before I dismissed them as crap, I found a good tutorial which highlighted the differences between these paints, and the acrylics I’ve been using. This was the first ever free-hand camo painting I’ve done; any mistakes were covered up by a layer of the base color.

Too late for this build, but still useful to know.

I’ve used brown filters in several light layers to blend the camo colors together; it also made the very pale base color a bit warmer and darker. Managed to break one of those backward pointing rods on the gun shield, so I replaced it with a styrene rod (I just noticed I forgot to paint it and the antenna before taking these photos).

Paintchips were painted using the base color and a dark brown color to stimulate light and deeper scratches; the metal parts were painted with AK Interactive’s True Metal paints. I left the painted parts to dry for a day, and then carefully polished them with a cotton swab. I painted some oil marks onto the large wheels; I’ve been looking forward to paint these ever since I saw how everyone else paints these wheels on the Hetzer and other Pnz 38 based vehicles; unfortunately the next layers of mud and dust covered these lovely marks up. Next time.

After washes and filters, I’ve added a copious amount of mud. It was mixed using pigments, plasters and static grass, and used a stiff brush to create splash marks. 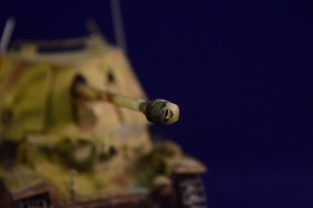 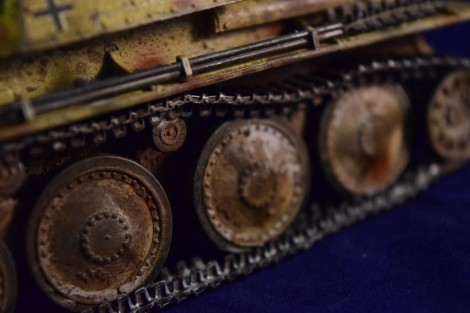 Even thought I did not exactly feel inspired to do this build, and I rushed some parts of it, I feel the results are much better than I anticipated. This is the problem with backlogs- you want to get them over with, so you can concentrate on new projects. I really envy the people who have the self-control of only buying a model at a time; I still have three-four half-built models I need to finish. This one took its place next to the MiniArt SU-76 I’ve finished not long ago (also a historical build); but the other two Marder III variants will be done in 1/72 to fasten things up.