You can find the previous parts of this review under the following links:

You can find the review I wrote of this model on armorama, and another review of a simplified version of the same kit here. In this last post we’ll finish up the vehicle.

Once the tracks were ready, I painted the sides of the lower hull olive green (Tamiya), then heavily dabbed on a dark brown/black/greenish mix of oil colors to simulate the color of dirty snowmelt; the reference I used was how buses look during the winter after a heavy snow… The same color went onto the road wheels as well, and once everything was dry, I installed the tracks. (I suggest leaving the return roller in a movable state so that you can do small adjustments if the tracks are a bit loose/tight.)

I masked everything with tape (the back of the engine compartment, the top of the fighting compartment, the tracks), and sprayed olive green onto the vehicle. The exact color does not really matter as it will be covered by white-wash (and the wartime “Russian green” was far from a standardized color in any way).

I gave the paint a couple of hours to dry, and covered the model with a semi-gloss varnish to have a surface for the decals to stick to. Since I wanted to go with the unique festive Christmas camo, I decided to use the large red dot decal that goes on top of the superstructure. (In retrospect it would have been better if I added the decal after I applied the whitewash.)

Since the red dot decal needs to conform a somewhat difficult topology (it goes over the fume extractor’s cover, the hatch and the armored observation hatches), it is given in three parts. Normally I would have elected to simply mask the area and spray the color, but since it’s a review I went with the decal option. There are some issues with this option. For one, it’s not going to be easy to pose the hatches open, unless you cut the decal up. (Difficult to do accurately.) The largest part went on relatively well, although the hinges of the crew hatch did present some problems. A generous application of decal setting solution immensely helped, but it was still not easy. I did manage to damage the decal with the brush trying to smooth it out and make it conform the raised details.

The part going over the extractor cover went on fine; the decal part going over the observation hatch, however was not that easy to apply. I could not put it on without forming a small fold at the corner. I trimmed it once the decal dried, and touched it up with some paint. Weathering also will help making these mistakes disappear. The decal is thin and of good quality otherwise; the casting texture is clearly visible underneath. All things considered it’s probably simpler just to mask the circle and paint it on using an airbrush. 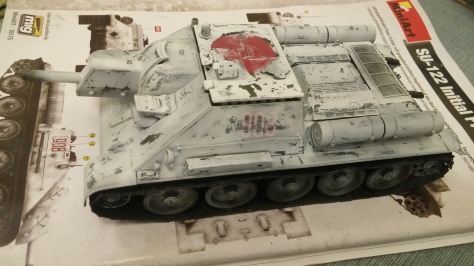 Once the decals were dry I applied another layer of varnish in preparation for the whitewash.

I have applied AK Interactive’s chipping fluid slightly diluted with an airbrush for the “hairspray technique”, and once it was dry, I went over with Tamiya’s flat white (also very slightly diluted). It was dry to the touch in about twenty or so minute, so I started on chipping. Wet the surface and with a toothpick I made small nicks on the paint. These were gently extended using a wet brush. As a second round of chipping I waited about a day- enough time for the AK Interactive product to become “less active”. (As you wait, it becomes more and more difficult to create chips.) I’ve prepared an approx 1% ammonia solution using an ammonia containing cleaning product (Windex is fine), and used this over the surface of the model. (Ammonia dissolves Tamiya paints.) With a bit more vigorous brushwork I was able to create smaller, finer chips and scratches. This method (Windex chipping) is very suitable for making subtly worn surfaces, and complements the larger chips created by the “hairspray” technique.

This is the step where I installed the back of the engine compartment. I noticed that the bolt holes are not drilled in, which was odd, since MiniArt was very careful to add other details which would not be visible once the model is completed, so I quickly drilled the holes myself.

Once everything dried, I applied yet another layer of varnish to protect the work so far, and sprayed over a very light “washable white” from Mig. (I’ve tried a lot of off-the-shelf weathering products in this build.) Most of this layer was removed using a wet brush; the purpose applying it was to create a light white, transparent layer over the green paint showing through the whitewash.

After THIS dried, you guessed correctly, yet another layer of varnish was added, and I went on painting the branches, and adding the decals. Which were -for the last time- sealed with varnish.

Once this was all done I dirtied up the chassis a bit using oil paints (some light filters of burned sienna, and blending in small quantities of different shades of brown), adding oil washes, and applying a thick layer of dirty snow slush made from dark browns, black and a tiny bit of green to the lower chassis and the running gear. I added some oil stains to the engine deck and the folded-down armor plate on the back (AK Interactive’s product diluted in white spirit applied in several steps), and some diesel stains to the external tanks (Vallejo’s product- as I said, I stocked up on weathering products lately…)

As a last step I glued the top of the fighting compartment on in an “opened” position, so that the interior is actually visible.

That’s pretty much it.

Overall the building was enjoyable, although I did run into some problems of the kit (and of my own making). Nothing is really deal-breaking; most of the problems can be either fixed or circumvent if you have a little experience in model building. If you like to be challenged -and not because you’re building a dog of a kit- this model will be perfect for you; however I don’t think it’s suitable for beginners. It’s also a considerable investment of time and effort; it is certainly possible to burn out, and just shelve it for a time. If you don’t feel like including much of the interior, go for the “light” version which has less parts and is considerably cheaper, too. My fiancee said I was nuts for building and painting this much detail (and enjoying it), so take my words with a grain of salt. One thing is for sure: I’m proud of this kit, treasure it for the achievement I feel it was building it, and I’m ready to move on to a simpler model (or two) -until the next one. (Which, I suspect, is going to be a T-54 version with over a thousand parts…)