I’m continuing the MiniArt SU-122 build and review- you can find the previous parts below:

You can find the photos of the parts and the instruction manual on armorama in my review, and you can find a comparison with the non-interior version of the same kit here.

If the gods will it, I should be ready in two more posts -and about two more weeks. (I hope.)

I had some constructive feedback which mentioned photo sizes. In further posts I’ll be experimenting the different options WordPress offers- thumbnails, galleries, etc. Please let me know if you have any suggestions -length, number of photos, quality of photos, style, anything. (I also would love to read comments on the models… after all, this is one of the reason for the blog.)

So, without further ado, onto the build:

The gun is not really difficult to build -except for the broken recoil guard, which I had to fix with glue. It was whole when the model came, but it snapped into three parts sometime during the build. I suggest you put this part aside before you touch the model, because it’ll break as you move the sprues around during the build. The hydraulic tubes elevating the gun are working (the two parts can move), however the way they are attached to the gun (glued to a PE holding bracket) makes this feature more like an option to fix the gun in any position you desire, than to make it adjustable after the gun is in place. In other words decide what position you’d like the gun in, put the it in place, and then glue the hydraulic tubes into place. Alternatively you can just forget about them, as they would not be visible, anyhow, and this would leave the gun movable. (In the non-interior version of this kit they are not included.)

A side-note: the wheel controlling the elevation of the gun is on the right side, between the gun and the wall of the fighting compartment… ergonomics was not a main concern when the vehicle was built.

I painted the gun in the “Russian” green color I’ll paint the whole vehicle with, and weathered it with oil washes, filters to make it look used and less uniform. Some wear-and-tear was simulated with painted chips (both black-brown and some metallic). The gun shield (not sure what it is- the fat protective shield around the base of the gun) is a three part assembly, with a prominent seam going along its length. Because the lifting hook is molded with one of the parts together, the filling and sanding requires a little care. 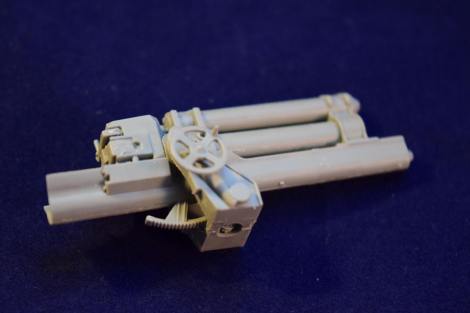 As you may notice the gun barrel is missing still- it is added once the gun is in its place. The plastic barrel has rifling on the inside; a pretty cool feature. One thing to mention: attach the gun barrel before you add the gun shield protecting it…

The building of the engine is pretty straightforward affair. The detail is pretty good, although no wiring/cabling guide is provided (which is a shame, really, but there is available reference material online). The transmission looks exceptionally well detailed; it is quite easy to see how the real thing worked once you assemble the model. The fit is really good; things snap together once in place. I painted the engine in a dark aluminium color, dry brushed it with brighter metallic shades, and weathered it using oil washes and Vajello’s engine grime product (I could not resist to try it). Some of the cabling was done using thin solder wire or Champagne bottle wire painted black (I used it to simulate cabling in the fighting compartment as well).

And the finished engine with the radiators attached. 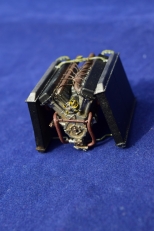 The steering mechanism in the transmission 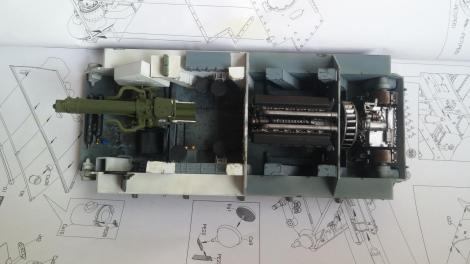 Some other parts: a really bent cover of the transmission… (Only my sample, apparently. I’m reviewing another SU-122 kit and the SU-85 by MiniArt, and they seem fine.)

The cooling flaps on the engine deck are positionable; it’s a pity only the back ones will be visible; the rest will be covered up by plastic parts covering the engine deck.

Well, that’s it for now. Next steps: putting the interior together.