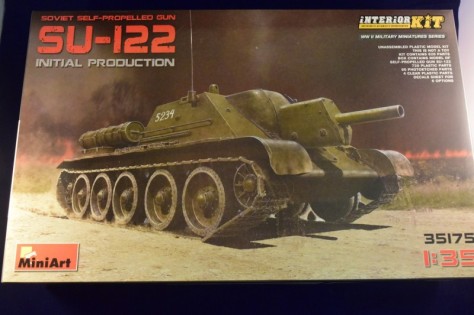 And here it is: another multi-part review of a 1/35 kit… and one with a complete interior, no less. This is a model by MiniArt I’ve been waiting for since it was announced last year. I’ve written review on Armorama – now let’s see how it builds up.

I have deviated from the instructions – I would much prefer to first do the basic shape, and fill it up with the details after. The instructions go the opposite way: you first build all the sub-assemblies (engine, transmission assembly, the complete interior, etc.), then put them together. This makes painting and weathering a bit awkward (the two firewalls, for example, are installed separately: one goes in the middle of the build, and at the very end), and it also makes correcting small fit issues more difficult.

The build starts with the bottom of the hull, which is also the floor of the interior; it’s a pretty big change from the usual “tub” scale models come with.

As a first step I did all the interior parts that are painted in the blue-gray base color. This meant that I attached most of the supports for the engine and the transmission, the last four sets of suspension units (mistakenly I glued in an extra one), the swing arms’ holders, and the driver’s controls, and control rods. The model is very well made – everything lines up remarkably well. The swing arms that hold the road wheels fit exactly where they should, and the control rods attach to the central rod accurately. (We’re talking about tolerances of less than a milimeter here.) The instructions, for example, would have you attach the parts supporting the engine glue to the engine block -which means they would have to be painted and weathered separately. Easier to glue them in place and add the engine later.

The controls and the connecting rods are very delicate and the cleanup is difficult. Astonishingly everything lines up perfectly (part C38 is the central, connecting rod, and all the others attach where they supposed to).

Same story at the back: tiny parts which can disappear easily.

First mistake: I glued a suspension unit in place that is supposed to be white… (background). This meant some serious masking later.

The basic hull is made out of the bottom and the two sides; the engine compartment is painted in the blue-grey color, the fighting compartment is white. I glued everything together that was to be painted in these base colors. The seat holders are -not surprisingly- very delicate. 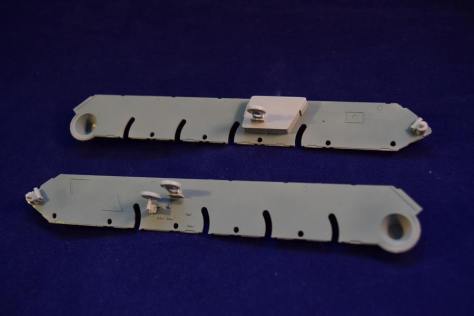 Front glacis- lots of stuff can be finished before gluing it in place.

The gigantic spring are actual springs -they are hollow, and would work exactly like springs do if they were made out of metal. I’m pretty impressed by this feat in injection moulding. The cleanup, however, is brutal. (And yes. I did glue the instrument panel the other way around…) I’ll have to look up the wiring- although I suspect it’ll be semi-fictional.

The armored flap in front of the driver is made out of several delicate pieces; pretty impressive affair.

Top of the fighting compartment. 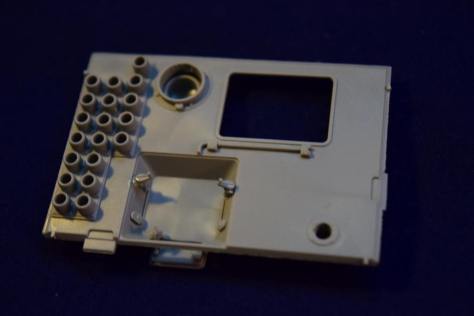 The outside cupola  and the flaps have some impressive casting texture.

Painting begins – base blue-grey mixed from Tamiya XF-25 and XF-18. 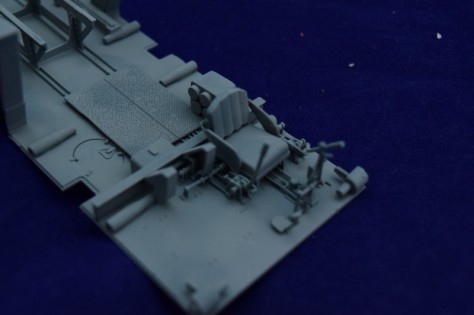 Masking and the dreaded white white color… Due to the impatience I had to do some real elaborate masking so I could paint the suspension unit on the front… it worked, though.

Advice: do not glue these in place before painting. Another relevation spraying Tamiya’s flat white: do not dilute it. I sprayed it undiluted, and it was incredibly nice. (Additional insanity: I did not undercoat it…)

As you can see there were some elaborate masking steps necessary about the suspension unit using masking tape and tissue paper… such is the fate of the impatient.

Assembly of the hull…

The hull’s sides are essentially held in place by the swing arms of the roadwheels. Make sure you cut the sprue at the right spot – and not cut off the small peg that holds the arm in place. The suspension is not workable (since the springs are plastic), but they, in theory, can be positioned however you like – but you’ll need to adjusted the springs holding them, too. It looks a bit overengineered to assemble the swing arms from three different parts, but it allows for some customization: depicting them in various states of disrepair. 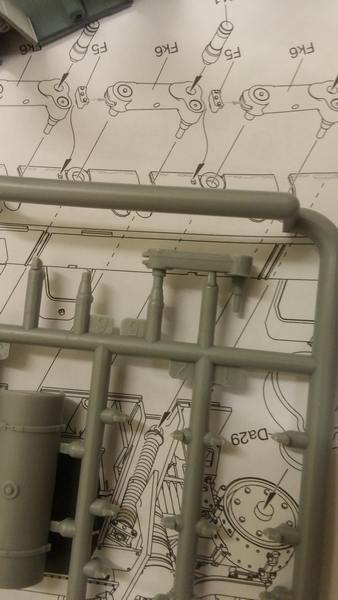 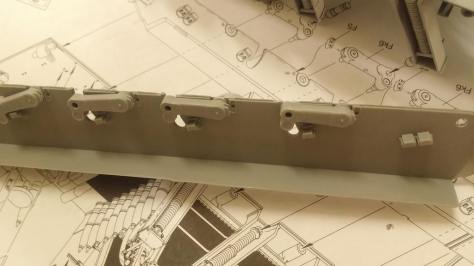 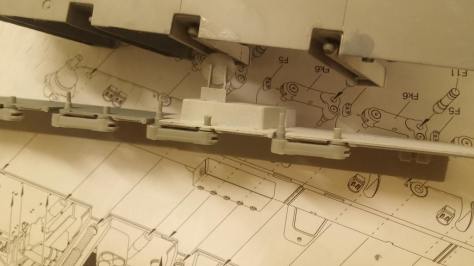 Putting in the firewalls – first things first. (The back of the second sets of suspension units should be painted blue-grey… this is why I prefer to do the build this way. It would be pretty inconvenient to repaint everything once the weathering is done.) 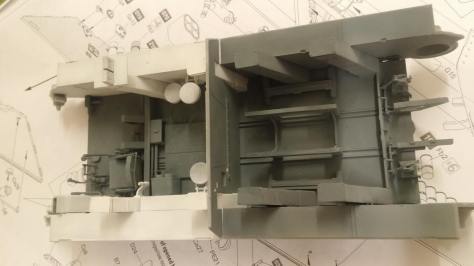 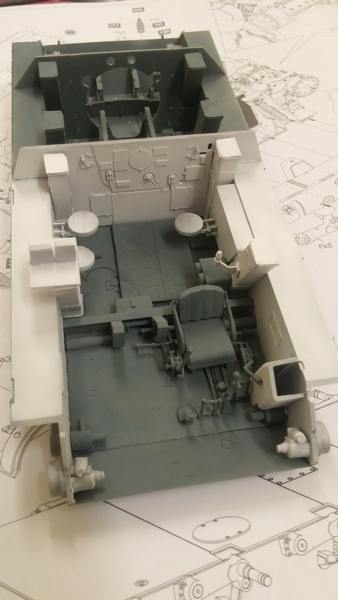 Part Ca33 is pretty warped as you can see- however, when glued in place, most of it gets straightened out. 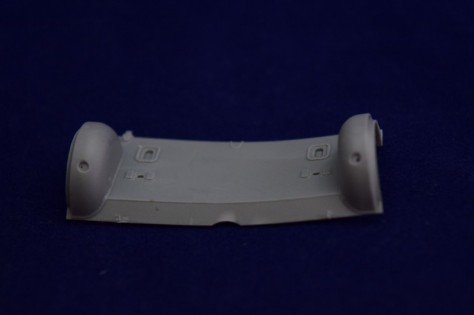 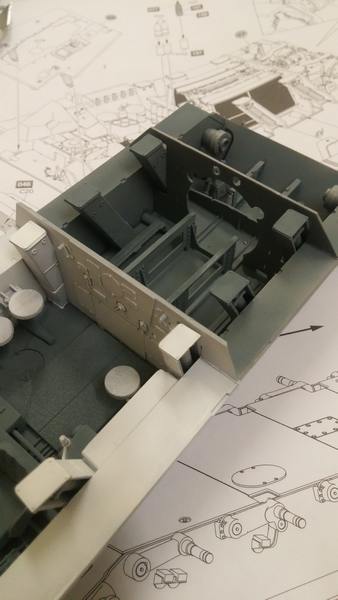 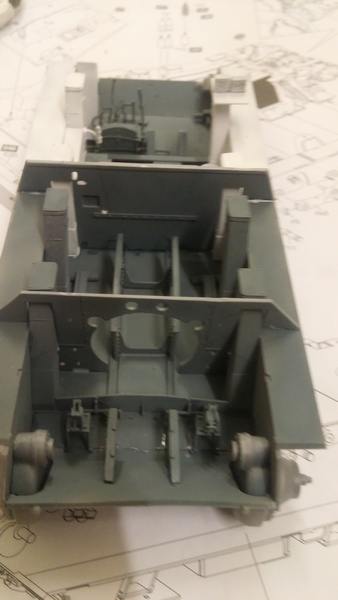 You can see that part Ca33 is still somewhat bent.

So far this is it. There is work being done on the engine, and the gun as well – keep tuned in. (I’ll be going on a leave, so the next part will be in two weeks.)