I’ve decided to do some experiments with pigments and different media used to fix them. I was curious if there was a difference between the different solvents in regards to the effect they have on the look of the pigments, on the color, and on the grip. (Many times we add pigments, then rub/brush off the excess to create a worn, dirty look.) I used a spare piece of fender with Tamiya flat green painted over white enamel base.

I’ve used Mig’s earth colored pigment, and the following solvents (the term is inaccurate, since they do not actually dissolve pigments, but there you go):

I mixed the pigments with the solvents, then brushed the mixture on. It was let to dry for a day.

In the case of organic solvents the pigments were simply carried onto the surface by the liquid; in all three cases the pigment particles remained visibly separated from the solvent phase. In case of water a slurry-like suspension was created. 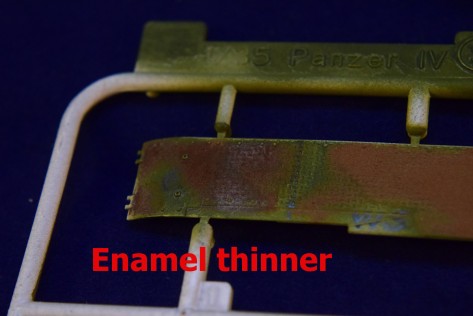 A much more uniform effect (the mixture resembled a muddy slurry), with some discoloration. (Apologies for the mismatching font type.)

On the left-hand side I added the pigments dry, and then used the fixer. On the right hand side I mixed the two together, just like in the previous cases, and applied this mixture to the surface. The effect is similar. The color of the pigment darkened somewhat.

It is important to see how well the pigments adhere to the surface with the different solvents, so I used a relatively stiff brush (and my thumb) to rub some of it off.

After some gentle rubbing, here are the results.

The enamel thinner did leave some of the pigments fixed to the surface. The darker color is still evident. 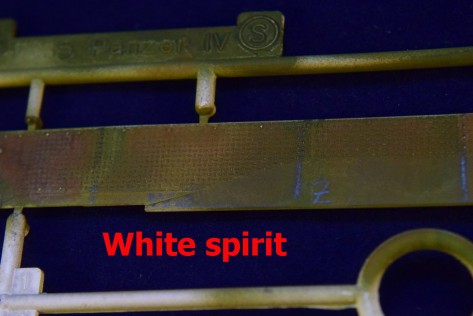 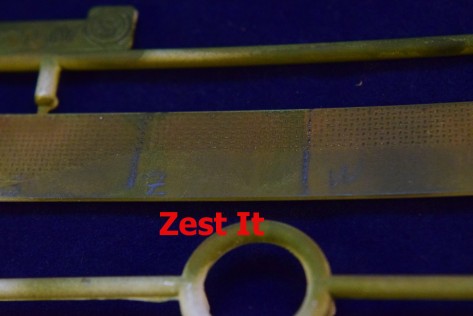 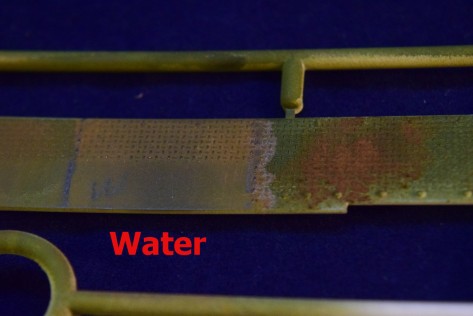 White spirit, Zest it and water had similar effects: majority of the pigments were rubbed off, but some remained leaving a nice, realistic dirty look. Most of the pigments stayed between the small details, where they were protected, but some acted as a filter on the flat surface as well. 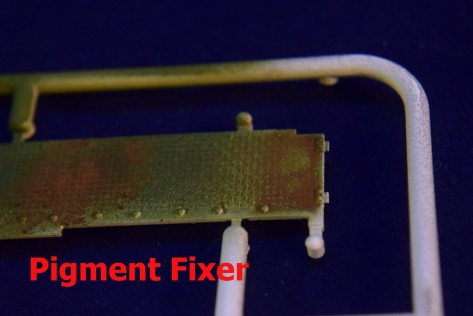 The pigment fixer -not surprisingly- fixed the pigments much better. When rubbed, however, it came off in chunks, as you can see on the right side.

In conclusion: if you plan to manipulate pigments, do not use pigment fixers as a carrier medium; apply it only after you are finished. Otherwise the choice of solvent is only dependent on you, and what the underlying paint can tolerate. (Obviously enamels would not be very stable if you used white spirit.)

6 thoughts on “Experiments with Pigments”