Disclaimer: the previous version of this article simply disappeared. It’s just gone. It does not really fill you with trust towards WordPress; I hope it’s only a glitch that will not surface again…

The ARL-44 was a peculiar tank. Design started immediately after Paris was liberated (hence the “44” in the name -signifying the date), and was more of an effort to re-establish France’s heavy industry, tank production, and to retain its talent, than actually an attempt at designing a modern tank.

The design called for a 48 ton heavy tank with a high calibre armament. Due to the wartime shortages, and the consequences of German occupation, the design had to incorporate several compromises. Its design is based on the pre-war French tanks, but it also bears some resemblance to the later German tank designs (it does look like a child of a Tiger II and a B1). The power plant was chosen to be captured German Maybach engines (HL230 600 hp), and the first prototype turret was armed with an American 76mm gun, which was later replaced by a new turret, and a 90mm DC45 tank gun. The turret was well armoured and large; an actual car engine was used to rotate it.

Not only the overall design was anachronistic; the suspension, drive wheels and the tracks were quite old-fashioned as well. The armour was well sloped at 120mm. By 1945 the need for a heavy tank disappeared, but the French authorities decided to press ahead with the production of 60 vehicles (downsized from the original 600). This was a political -and an economical- decision, rather than a military one as it was mentioned previously. This showed an incredible amount of foresight on behalf of the decision makers in my opinion.

The production trials started in 1947, and delivery started in 1949. The tanks were used to replace the captured Panthers the 503e Régiment de Chars de Combat regiment operated. (Which is also an interesting story by itself.)

In service the ARL-44 was found to be less than satisfactory. The suspension, gearbox and other parts of the running gear had frequent breakdowns, which resulted in the tank being recalled from active service in 1953, and replaced by the M47 Patton tanks. 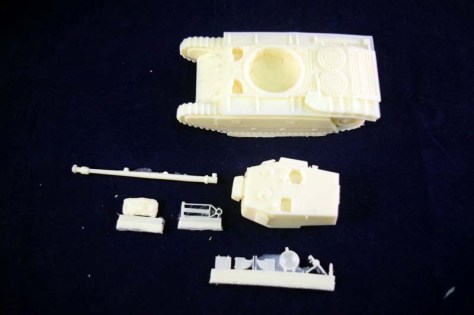 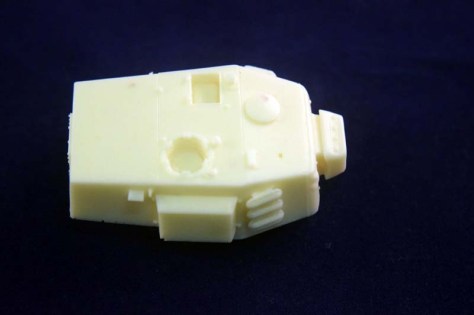 Cromwell Models sent the model in a simple ziplock bag; no artwork, and no instructions included. The parts were undamaged during transit.

The model is cast in a yellowish resin. The casting generally is good, although some issues are visible (around one of the drive wheels, and there was a bubble in the muzzle break). This is not surprising, considering how intricate the parts are; the level of detail moulded on is pretty impressive.

Some of the resin parts are incredibly fine; the gun lock in particular is a wonder by itself. It’s moulded onto some resin support; despite my worst fears it was very easy to cut it free without snapping it.

The hull is essentially one piece: everything is moulded on: tracks, running gear, everything. It’s attached to the moulding block through the tracks; you’ll need a large, fine saw to cut it free. (And you’ll need to be careful, not to cut into the tracks. A word about sawing resin: resin dust is toxic. Use wet sawing, wet sanding techniques when working with resin to minimize harm to yourself and others around you.)

The lack of instructions is not really an issue for this model; the number of parts are so low, it’s really not that difficult to figure out what goes where. (Although I still cannot figure out where that cross-like part is going…) 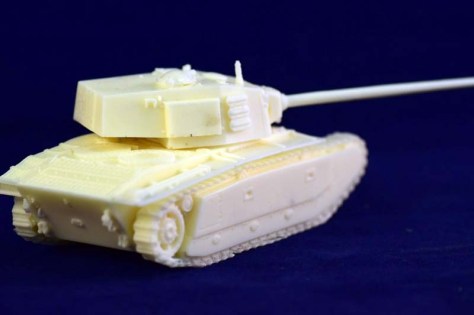 The gun barrel is very nicely done; it’s straight (not always the case with resin models), and the bubble on the underside of the muzzle break was easy to fill in.

The only minor issue I had was the top of the turret: the surface is marred by tiny little holes, which I completely missed at the priming phase. (I normally use black primer). They should be easy to fill in, if you catch them BEFORE you paint the tank. Well, lesson learned; it’s grey primer from now on. 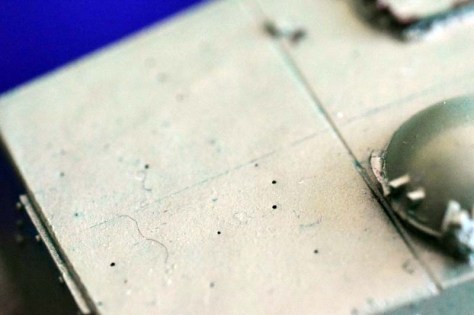 Since I play World of Tanks, I’ve decided to paint my model using the non-historic bluish-greenish color the French tanks come with. It took me a while to achieve the desired color. I kept mixing different ratio of blues and greens; unfortunately I can’t recall the formula of the most successful one.

I used filters to modulate the color even further.

I’ve used some left-over decals from a French M5 Stuart to dress it up a bit. (The printing on the decals is awful, but they do give a little color to the tank.) I was seriously tempted to use the branch/leaf camo pattern from World of Tanks, though, but since I was doing a review I decided to forgo the silliness. If I get another French tank that is in the game, I’ll do the pattern, though.

After some protective varnish I used oil paints to do pin washes and streaks. 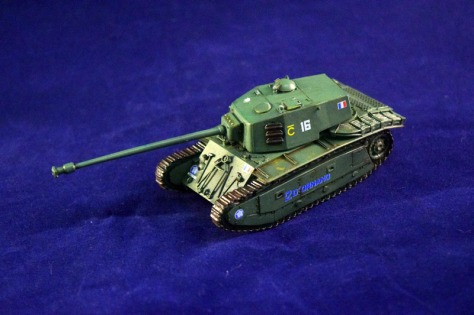 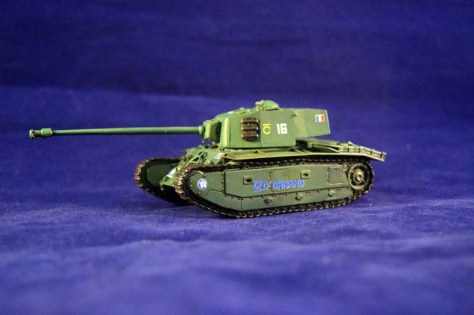 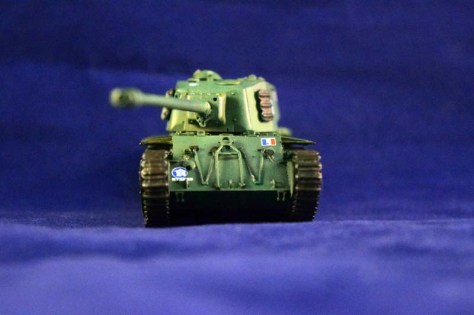 I used pigments for the accumulated dirt: added them dry, and used white spirit to dissolve them. A clean brush helped to make sure the extra pigments are taken away. 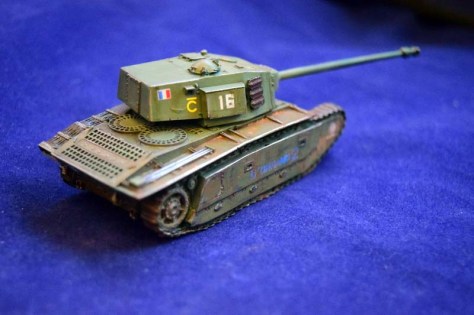 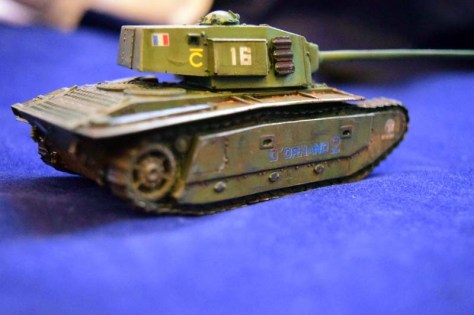