I’ve learned about this tank the first time when it was introduced into the online game World of Tanks, where it acquired somewhat of a hipster tank reputation. (It was so underperforming that certain people felt compelled to play it…) The looks sold this vehicle for me: it definitely looks unique. (Too bad about the in-game stats…)

It’s really difficult to find much information about this tank destroyer online. About fifty Churchill tanks were converted into tank destroyer roles (the numbers vary between 24 and 50) between 1941-’42. The increase of firepower in case of the Churchill was always problematic as the turret was too small to significantly upgrade the gun it can house. The largest guns they could fit was the widely used 6 pounder, and the 75mm gun derived from it. By going the usual tank destroyer way, the tank has lost its turret, but received a larger, more effective gun in return. The 3 inch anti-aircraft gun was housed in a thick boxy superstructure (frontal thickness 3.5inch) using a ball mount. Not one of these conversions saw combat, and were used later on for target practice… as you can see it on the example remaining in Bovingdon.(A shame, really. It would be nice to see this tank restored.)

The conversion comes in a ModellTrans blister pack as usual, which is quite an effective way to protect the parts from damage. Quality of resin is good, so the cleanup is relatively straightforward. The detail is also very nice for this scale. We get a new upper chassis for the Churchill, the boxy superstructure, the gun, and two tool boxes.

One issue with the kit is the track covers. Modelltrans has included the blast covers at each ends; they were only fitted to turreted tanks to protect the covers when the main gun was fired. The reason is probably simple: Modelltrans simply used a mould of an existing upper hull section without any alterations. 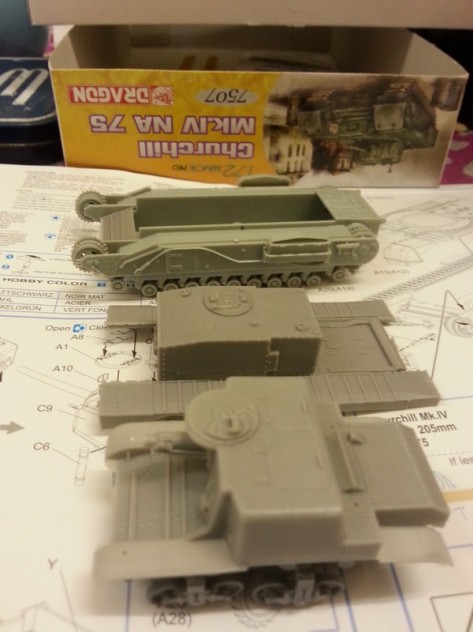 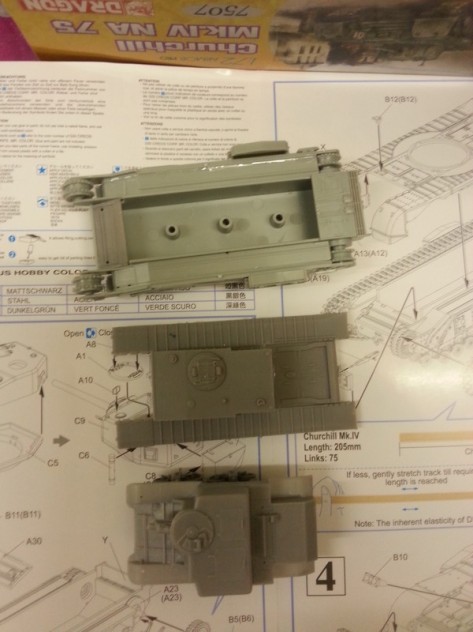 (Just ignore the T18. That’s the topic of the next post.)

The conversion is really easy. It is designed for the DML kits, so I’m not sure if it fits the Airfix, Hasegawa or Italeri offerings, but knowing their quality in comparison to the DML one, it’s probably better to use the DML kit anyway. The resin upper chassis fits very well onto the Churchill model; it can actually be snapped into place. The superstructure’s fit is also quite good, although there were some gaps where putty had to be used. Overall there are no real issues with assembly at all. The conversion essentially builds itself if you shake the box hard enough… One detail is missing: the vertical tubes next to the boxes mounted onto the superstructure. These should not be very difficult to scratchbuild, but I still would have preferred to get them. 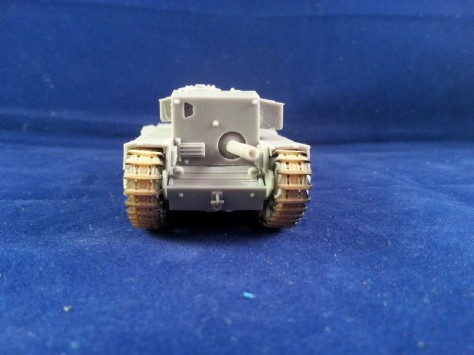 The painting went the usual way: black primer spray was followed by a dark green colour. I tried to get it as close as possible to the dark green #24 used by the British forces, but I also needed to lighten it to take the scale effect in account, and to pre-plan for the subsequent weathering steps. 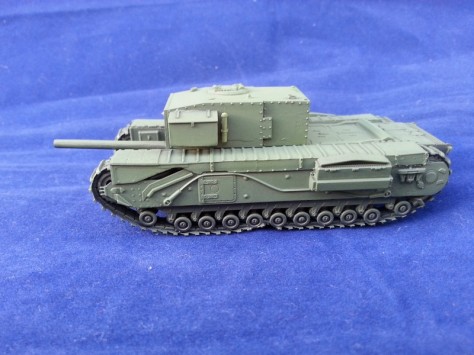 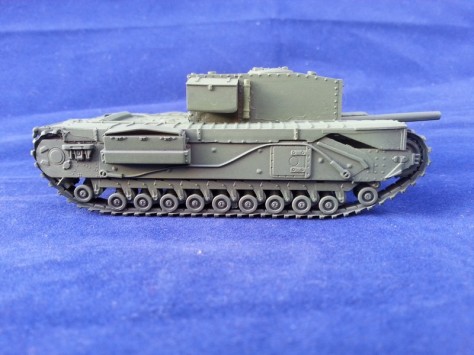 Highlights were added using the usual Citadel snot green colour… 🙂 (I love their names; bestial brown and vomit brown especially.) I’m always worried these will stand out, but by the end of weathering they usually blend in quite well. 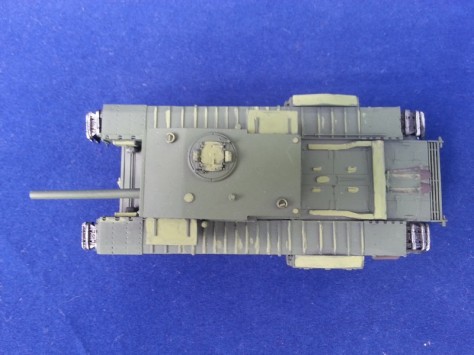 Weathering went relatively fast. I started with the usual filters -both pre-diluted, and the oil paint-dot methods-, but then wanted to try something quick and fast. I have bought a couple of those Tamiya make-up kits (weathering products that look like a compact make-up kit for women), and tried the sand, light sand and mud colours as filters. If you use light sand and sand in a very thin, irregular layer, it looks like armour discolouration and dust accumulation; a pretty convincing effect when you think about how you achieve it. (By petting your model with a small sponge, essentially.)

These colours went on thicker on the lower chassis to simulate dirt; gunmetal was added to the edges, and the tracks with the same method. I have to say, the results were quite satisfactory, and more importantly: easy. 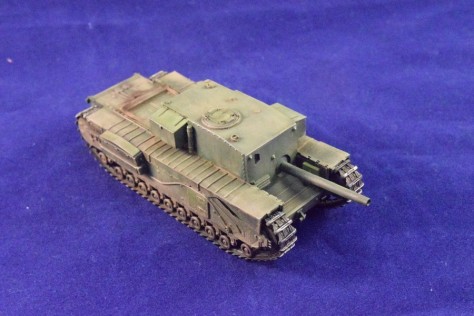 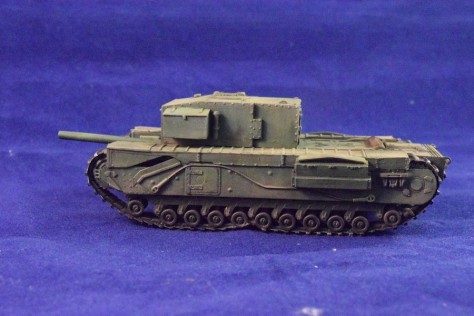 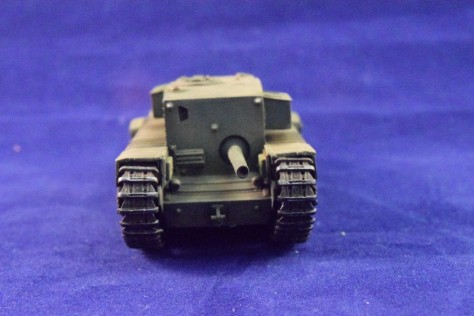 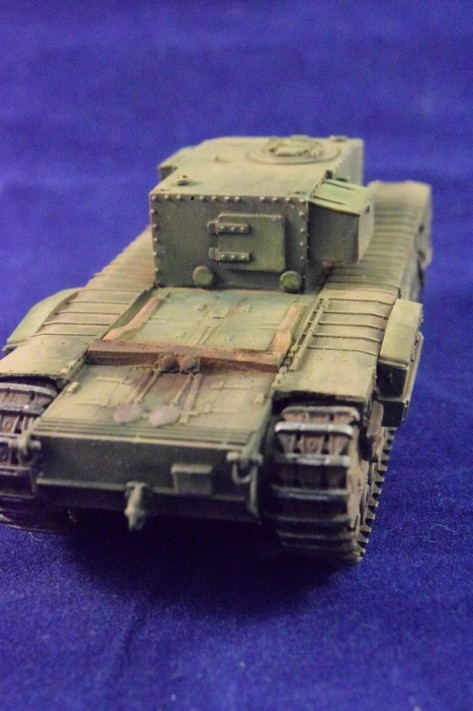 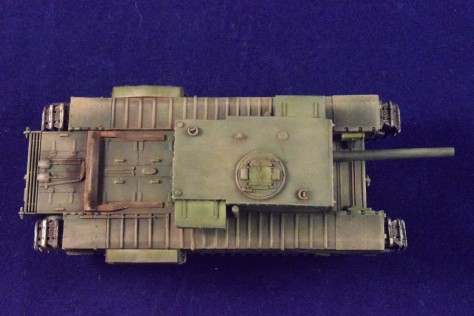 Since finally I have bought a new camera (a Nikon D3300), I was playing a little with the aperture settings, and how they affect the field of depth. The difference between large and small aperture is pretty apparent. (Not strictly relevant to our, but an interesting comparison.) 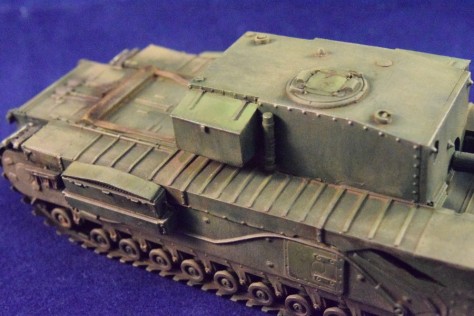 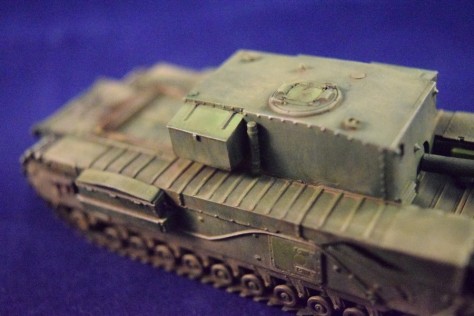 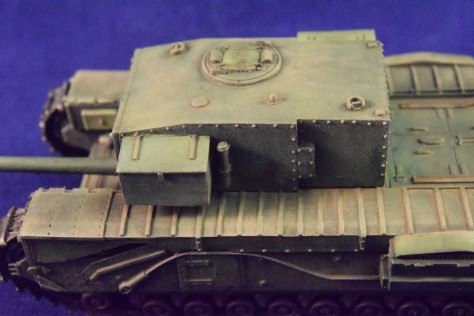